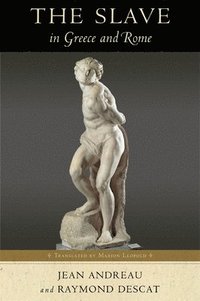 The Slave in Greece and Rome

av Jean Andreau, Raymond Descat
(1 röst)
Häftad Engelska, 1987-01-01
309
Köp
Spara som favorit
Jean Andreau and Raymond Descat break new ground in this comparative history of slavery in Greece and Rome. Focusing on slaves' economic role in society, their crucial contributions to Greek and Roman culture, and their daily and family lives, the authors examine the different ways in which slavery evolved in the two cultures. Accessible to both scholars and students, this book provides a detailed overview of the ancient evidence and the modern debates surrounding the vast and largely invisible populations of enslaved peoples in the classical world.
Visa hela texten

"[This] excellent monograph . . . covers chattel slavery from Mycenean times to the end of the Roman empire. . . . Its focus is on the economic use and the everyday existence of slaves, particularly in classical Athens and republican and imperial Rome."-Niall McKeown, The Classical Review "A concise and elegant summary of what is known about classical slavery. The authors provide a rich and well-written argument, moving among various kinds of evidence, literary and material, and treating historiographical difficulties and scholarly controversies without getting lost in them. One of its great virtues is the constant interplay between Greek and Roman practices, providing a model of comparative study."-Page duBois, author of Slavery: Antiquity and Its Legacy and Slaves and Other Objects "Andreau and Descat have taken on a difficult task in their effort not only to discuss over one thousand years of slavery but also to synthesize and contextualize what is often very problematic source material, produced by two societies which were not terribly interested in any sort of systematic discussion of slavery. The end result is an eminently readable study, which also serves as an exemplary model of comparative history."-New England Classical Journal