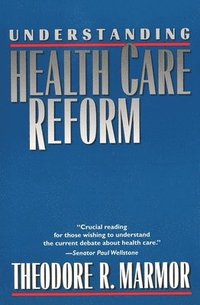 av Theodore R Marmor
Häftad Engelska, 1994-11-01
339
Köp
Spara som favorit
Skickas inom 10-15 vardagar.
Fri frakt inom Sverige för privatpersoner.
The reform of American medical care is the most important topic on the nation's domestic agenda and the centerpiece of the Clinton administration's plans for social policy and long-term economic development. This book, written by a preeminent analyst of medical politics and policy who is a frequent adviser to Congress, helps to clarify the current debate over the President's bill and the proposed alternatives to it. It is essential reading for 1994. Theodore Marmor, whose work has appeared in scholarly journals and books, as well as in the nation's major newspapers and magazines, here presents some of his most recent writings that illuminate the historical, political, and economic considerations lying behind various proposals now under debate. Marmor explains what we can and cannot expect from reform of American medicine, and he addresses the many conflicting claims about the remedies for America's problems with medical costs, quality, access, and organizations. He discusses, for example: -the misplaced faith that cutting waste will greatly ease our financial troubles and markedly improve our health; -the exaggerated arguments for "managed competition"; -the myths that either non-profit or for-profit institutions are the key to reform; -the misleading and fearful debate over rationing; -the lessons to be learned from Canada's and Japan's experiments with universal health insurance; -the controversial place of Medicare in the current reform struggle; -barriers facing implementation of any of the major health care proposals; -and the possibility of fusing different approaches to achieve reform.
Visa hela texten