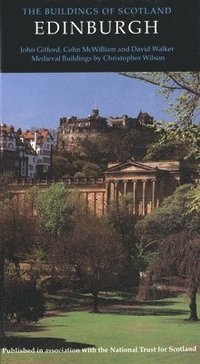 av John Gifford, Colin McWilliam, David Walker, Christopher Wilson
Inbunden Engelska, 1984-01-01
719
Köp
Spara som favorit
Skickas inom 5-8 vardagar.
Fri frakt inom Sverige för privatpersoner.
The historic capital of Scotland is well known as a fortified medieval city with castle and crown-steepled church, its Royal Mile leading down to the Abbey and Palace of Holyrood; as a merchant city of the Stuart period with Parliament House and closely built houses and tenements; as a Georgian town with the largest sequence of planned developments in Britain; as a Victorian town of churches and banks, hotels and pubs, of quiet surburbs; and as a twentieth-century city where the Festival and its Fringe have encouraged the rediscovery of old buildings and the planning of new ones. A comprehensive gazetteer is provided to all notable developments of central Edinburgh, the seaport town of Leith and the suburban neighbourhoods.
Visa hela texten