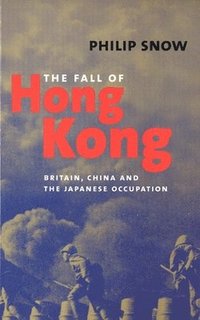 The Fall of Hong Kong

Britain, China, and the Japanese Occupation

av Philip Snow
Häftad Engelska, 2004-03-01
569
Köp
Spara som favorit
On Christmas Day 1941 the Japanese captured Hong Kong and Britain lost control of its Chinese colony for almost four years. The Japanese occupation was a turning point in the slow historical process by which the British were to be expelled from the colony and from four centuries of influence in East Asia. In this powerful narrative, Philip Snow unravels the dramatic story of the occupation from the viewpoint of all the key players - the Hong Kong Chinese, the British, the Japanese, and the mainland Chinese - and reinteprets the subsequent evolution of Hong Kong. 'stimulating and highly informative' Jonathan Mirsky, Literary Review 'The amount of work involved, and the clarity of mind Snow brings to his storytelling and contextualising, are amazing' John Lanchester, Daily Telegraph 'Snow's book is by a country mile the best thing written about the period' Independent on Sunday '... very different, and very good' Economist 'Finally here is a solid history of Hong Kong under the Japanese, written with empathy and skill ... it sheds light on today's Hong Kong and should be required reading for anyone living there' Mishi Saran, Asian Wall Street Journal '... beautifully written, with many telling anecdotes, and also thoroughly researched, drawing on Chinese, Japanese and British archives and all other available sources' Lawrence D. Freedman, Foreign Affairs 'Snow tells a compelling tale from different points of view ... and the result is a nuanced, sympathetic and multifaceted work' Joyce Hor-chung Lau, Hong Kong Magazine Philip Snow, an orientalist educated at Oxford University, is the author of the acclaimed 'The Star Raft: China's Encounter with Africa'.
Visa hela texten

"[The Fall of Hong Kong] is very different, and very good. . . . Where [Snow] comes into its own is in his use of Japanese and Chinese as well as British sources, which offer a much more nuanced picture than has appeared before in English of life among Hong Kong's different communities before and during the Japanese occupation."-Economist

Philip Snow is an orientalist educated at Oxford University. The son of the writers C. P. Snow and Pamela Hansford Johnson, he is author of the acclaimed The Star Raft: China's Encounter with Africa.