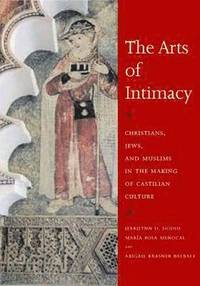 The Arts of Intimacy

Christians, Jews, and Muslims in the Making of Castilian Culture

av Jerrilynn D Dodds, Maria Rosa Menocal, Abigail Krasner Balbale
Inbunden Engelska, 2008-10-03
349
Bevaka
Spara som favorit
Bokens leverantör håller tillfälligt stängt på grund av Coronapandemin. Klicka "Bevaka" för att få ett mejl när boken går att beställa igen eller välj ett annat format nedan.
Finns även som
Visa alla 1 format & utgåvor
This splendidly illustrated book is a history of medieval Castile from the 11th to 14th centuries, told from a largely cultural standpoint. Whilst the political narrative of these centuries may emphasise war and intolerance - the inexorable forward march of the reconquista, the authors argue that the cultural record tells a very different story. They emphasise the concept of hybridisation, and show how interaction rather than antagonism more often informed cultural transactions between Christians, Muslims and Jews in the great cities of the region, focusing on Toledo, Seville and Cordoba. The extraordinary architecture of the region receives probably the most attention, but none of the visual arts miss out, and there are also extensive discussions and translations of the poetry and written culture of the three communities. A beautiful testament to a unique artistic culture, and an engaging presentation of the growing argument for a surpringly mixed cultural world.
Visa hela texten

"The art, the architecture, and the poetry produced in the medieval Iberian peninsula are of such astonishing quality that a survey, especially when it is as intelligent and well presented as this one, can hardly fail both to illuminate and instruct." -J.H. Elliott, New York Review of Books -- J.H. Elliott New York Review of Books "Jerrilynn D.Dodds', Maria Rosa Menocal and Abigail Krasner's Balbale's Arts of Intimacy: Christians, Jews, and Muslims in the Making of Castilian Culture stands out in every respect: it is challenging, thorough, and compelling. Its importance lies in conveying the unique cultural and linguistic polyphony of the nascent Castilian culture. Iconographic testimonies from architecture, epigraphy and calligraphy orchestrate the historical voices expressed in an unprecedentedly rich multilingual poetry. A startling and provocative book that puts an end to any essentialist claim to be laid on this exceptional part of Europe."-Angelika Neuwirth -- Angelika Neuwirth "A delightful blend of poetry and solid science. How a nation was born out of fascination for the enemy it was victoriously fighting, gaining momentum 'with each meal shared, or bridle admired, each textile or ivory box received in tribute', and with each story told."-Gabriel Martinez-Gros -- Gabriel Martinez-Gros "All Medievalists should welcome and treasure this splendid book. Here we see, in an innovative and eminently convincing perspective, the unique phenomenon of medieval Iberia, as a collaborative and also as a conflictive creation of Castilians belonging to the three religions. As much for scholars interested in literature and language, as for those concerned with art and architecture, this book will be 'must' reading. Dodds, Menocal, and Krasner Balbale deserve our thanks and our congratulations."-Samuel G. Armistead -- Samuel G. Armistead "The Arts of Intimacy creates a composite close-up of a part of Spain usually associated with rock-solid Catholic oppression and authority...explored here subtly and richly."--Times Literary Supplement -- Marina Warner Times Literary Supplement "The compelling story of the complex entangling of Christian, Muslim, and Jewish history, culture, literature and art in medieval Iberia has been told many times before...But it has never been told like this...A rich tapestry of a book that brings to vivid life the dialectic of acculturation and assimilation in which medieval Spain's three religious groups were enmeshed."--Jill Ross, Times Higher Education (UK) -- Jill Ross Times Higher Education (UK) "...beautiful and gorgeously illustrated...this is a fascinating trawl through a forgotten time."--Catholic Herald Catholic Herald "Richly illustrated... Deliberately accessible... Through its clear narrative and its elegant style , and thanks to its affordable price, Arts of Intimacy works to render a fascinating and complex topic more widely accessible to a general readership."-Andrea Weisl-Shaw, Medium Aevum -- Andrea Weisl-Shaw Medium Aevum "Beautifully written and lavishly illustrated, the book represents a distinguished contribution to our understanding of the cosmopolitan world of medieval Iberia."--Catholic Historical Review Catholic Historical Review "[The Arts of Intimacy] unfolds as a complex interlacing of literary, visual, and historical evidence that challenges the idealized notion of medieval Iberian convivencia, or peaceful coexistence, with nuanced interpretations of crossdisciplinary evidence. The text's high points are thoroughly enjoyable."-Maria Judith Feliciano, Speculum--A Journal of Medieval Studies -- Maria Judith Feliciano Speculum--A Journal of Medieval Studies

Bloggat om The Arts of Intimacy

Jerrilynn D. Dodds is distinguished professor and senior faculty advisor to the provost for undergraduate education, City College of New York. Maria Rosa Menocal is director, Whitney Humanities Center, and Sterling Professor of Humanities, Yale University. Her previous book, The Ornament of the World: How Muslims, Jews, and Christians Created a Culture of Tolerance in Medieval Spain, has been translated into seven languages. Abigail Krasner Balbale is a candidate for the Ph.D. in history and Middle Eastern studies at Harvard University, where she focuses on the cultural history of medieval Iberia.