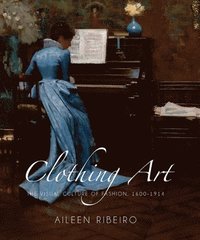 av Aileen Ribeiro
Inbunden Engelska, 2017-01-03
656
Köp
Spara som favorit
Kan levereras innan julafton!
An entirely new way of looking at the history of fashion through the eyes of artists There have always been important links between art and clothing. Artists have documented the ever-evolving trends in fashion, popularized certain styles of dress, and at times even designed fashions. This is the first book to explore in depth the fascinating points of contact between art and clothing, and in doing so it constructs a new and innovative history of dress in which the artist plays a central role. Aileen Ribeiro provides an illuminating account of the relationship between artists and clothing from the 17th century, when a more complex and sophisticated attitude to dress first appeared, to the early 20th century, when the boundaries between art and fashion became more fluid: haute couture could be seen as art, and art used textiles and clothes in highly imaginative ways. Her narrative encompasses such themes as the ways in which clothing has helped to define the nation state; how masquerade and dressing up were key subjects in art and life; and how, while many artists found increasing inspiration in high fashion, others became involved in designing "artistic" and reform dress. Sumptuously illustrated, Clothing Art also delves into the ways in which artists represent the clothes they depict in their work, approaches which range from photographic detail, through varying degrees of imaginative reality, to generalized drapery.
Visa hela texten

"One of [Ribeiro's] broadest and most ambitious works. . . . Ribeiro may be a historian of dress, but she's also a cultural omnivore. . . It's easy to get lost among the references, not to mention the gorgeous imagery, and it's possible-and tempting-to dip in and out. That's OK. But Ribeiro's argument, sustained over many pages and built on an accumulation of detail and evidence, is worth taking the time to consider."-Vanessa Friedman, New York Times Book Review "Aileen Ribeiro's magisterial and beautifully designed new book proves that all representation of clothing in art carry meaning... Prof. Ribeiro has led her field-the study of the history and portrayal of clothing-for decades and her comprehensive knowledge flowers here, not just as scholarly insight, but also through her understanding of clothing."-Philippa Stockley, Country Life, February 2017. "Clothing Art is a culmination of the author's academic interests and the product of 40 years of writing, teaching and publishing. With its distinctive approach to dress history, it is without rival."-Martin Pel, Selvedge "This is a brilliant, sumptuously illustrated exploration of fashion through the eyes of artists... Ribeiro shows how the history of dress and the history of art are inseperable."-Sebastien Shakespeare, Tatler "In the future, anyone wanting to engage in interpretative discussion of art and clothes will have to come here first."-Nicola Shulman, Times Literary Supplement "The gift of Clothing Art is that it makes its case about the place of dress in art so quietly and impressively, accumulating image after image, drawing our attention very often to something remarkable that is being communicated by these artists in the clothes they depict."-Shahidha Bari, Literary Review "This is an important book by a leading authority on dress in the period covered . . . Ribeiro writes in an easy and engaging style, which the non-professional art or clothing historian can understand . . . like most Yale University Press books, it is beautifully produced, with the clarity of the illustrations being particularly appreciated."-Naomi E. A Tarrant, COST "This beautiful book is a real treat to read through . . . ravishing pictures, beautifully designed and written, it will inform and delight established scholars as much as new students of dress history. . . . There is simply no end to what you can learn from this lovely book."-Janet Mayo, Journal of Dress History Winner of the 2017 Apollo Book of the Year. 'Does fashion merit a place in art history? Most certainly when it is written by Aileen Ribeiro.' - Robert O'Byrne, Apollo 'a fascinating and beautifully illustrated voyage through a selective visual and social record of fashion, depicted in a variety of European paintings.' - Jane Bridgeman, The Art Newspaper 'Clothes are sensuous things and Ribeiro's book uniquely succeeds in conveying in words and pictures the peculiar pleasure derived from the sense of touch.' - Sanda Miller, The Burlington Magazine

Aileen Ribeiro is professor emeritus in the history of art at the Courtauld Institute of Art, London.