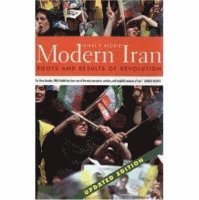 Roots and Results of Revolution

av Nikki R Keddie
Häftad Engelska, 2006-08-01
201
Köp
Spara som favorit
The standard history of modern Iran, now revised and updated to explain the country's tumultuous recent history In this substantially revised and expanded version of Nikki Keddie's classic work Roots of Revolution, the author brings the story of modern Iran to the present day, exploring the political, cultural, and social changes of the past quarter century. Keddie provides insightful commentary on the Iran-Iraq war, the Persian Gulf War, and the effects of 9/11 and Iran's strategic relationship with the U.S. She also discusses developments in education, health care, the arts, and the role of women.
Visa hela texten

"If one has only limited time to gain an appreciation of the revolutionary force of Islam in Iran, it should be spent here."-Scott Armstrong, Washington Post Book World Selected by Choice Magazine as an Outstanding Academic Title for 2005 Selected as a 2007 AAUP University Press Book for Public and Secondary School Libraries "Shifting her historical focus from the roots of the Iranian revolution to its consequences, Nikki Keddie has expanded her original classic to include a sharply probing and perceptive guide to more than two decades of tumultuous developments in the Islamic Republic of Iran."-Gary Sick "Roots of Revolution remains a classic in the field of Middle East Studies. The new chapters provide up-to-date and comprehensive information on all aspects of post-revolutionary Iran, from politics and economics, to gender, human rights, rights of minorities, and relations with the United States. A must read for anyone interested in Iran's current struggle for democracy!"-Janet Afary, Author of The Iranian Constitutional Revolution: Grassroots Democracy, Social Democracy, and the Origins of Feminism "I regularly use Modern Iran as a textbook in both introductory and advanced seminar classes. It is written in an engaging style and brings Iranian history into focus-particularly providing the necessary background to understand current events."-Monica M. Ringer, Amherst College "Nikki Keddie's classic work, in this updated and expanded version that looks into both roots and results of revolution, is one of the most perceptive, impartial, and concise analyses of Iran's past and present."-Nayereh Tohidi, California State University "For three decades, Nikki Keddie has been one of the most perceptive, sensitive and insightful analysts of Iran. Writing about a region where instant experts are the norm, Keddie's work has always been profoundly important and has had a major impact on the way Iranians think about themselves."-Ahmed Rashid

Nikki R. Keddie is professor of history at the University of California Los Angeles.