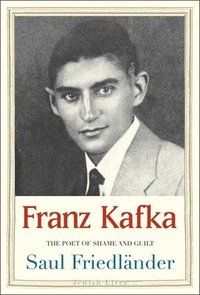 The Poet of Shame and Guilt

av Saul Friedlander
Inbunden Engelska, 2013-05-03
299
Köp
Spara som favorit
Skickas inom 7-10 vardagar.
Fri frakt inom Sverige för privatpersoner.
Finns även som
Visa alla 2 format & utgåvor
From the prizewinning Jewish Lives series, a highly original and engaging appraisal of Kafka's life, work, legacy, and thought Franz Kafka was the poet of his own disorder. Throughout his life he struggled with a pervasive sense of shame and guilt that left traces in his daily existence-in his many letters, in his extensive diaries, and especially in his fiction. This stimulating book investigates some of the sources of Kafka's personal anguish and its complex reflections in his imaginary world. In his query, Saul Friedlander probes major aspects of Kafka's life (family, Judaism, love and sex, writing, illness, and despair) that until now have been skewed by posthumous censorship. Contrary to Kafka's dying request that all his papers be burned, Max Brod, Kafka's closest friend and literary executor, edited and published the author's novels and other works soon after his death in 1924. Friedlander shows that, when reinserted in Kafka's letters and diaries, deleted segments lift the mask of "sainthood" frequently attached to the writer and thus restore previously hidden aspects of his individuality. About Jewish Lives: Jewish Lives is a prizewinning series of interpretative biography designed to explore the many facets of Jewish identity. Individual volumes illuminate the imprint of Jewish figures upon literature, religion, philosophy, politics, cultural and economic life, and the arts and sciences. Subjects are paired with authors to elicit lively, deeply informed books that explore the range and depth of the Jewish experience from antiquity to the present. In 2014, the Jewish Book Council named Jewish Lives the winner of its Jewish Book of the Year Award, the first series ever to receive this award. More praise for Jewish Lives: "Excellent" -New York Times "Exemplary" -Wall Street Journal "Distinguished" -New Yorker "Superb" -The Guardian
Visa hela texten

"This stimulating book investigates some of the sources of Kafka's personal anguish and its complex reflections in his imaginary world."-Jewish Ledger * Jewish Ledger * Selected as a Choice Outstanding Academic Title for 2013 in the Germanic Category. -- Outstanding Academic Title * Choice * "[Friedlander] has clearly mastered the vast scholarship that has attached itself to Kafka, and he brings fresh insights of his own to the challenging body of work Kafka left behind."-Jonathan Kirsch, Jewish Journal -- Jonathan Kirsch * Jewish Journal * "Interweaving Kafka's letters, diaries and stories, [Friedlander] shows us a new and vital Kafka, who made literature out of all the things he brilliantly failed at in his mostly painful life. Friedlander, the great historian of the Holocaust, intricately reveals how longing and personal history can disturb and inspire genius. It's as if I'd never read Kafka before, and finally know him."-Philip Schultz, Harriet: A Poetry Blog, the Poetry Foundation -- Philip Schultz * Harriet: A Poetry Blog * "A creative, risky approach to interpreting Kafka. . . . Friedlander's approach should motivate us to do what we should: reread one of the masters of 20th-century fiction."-The Forward * The Forward * "One turns with relief to the immensely readable Saul Friedlander, whose short biographical essay on Kafka appears in the excellent Jewish Lives series from Yale University Press. . . . Friedlander's style is elegant and lucid, his knowledge of Kafka's oeuvre and social world superb, his command of the critical literature impeccable. . . . Could very well serve as the new classic short introduction to modernism's most elusive writer."-Weekly Standard * Weekly Standard * "Like Kafka's work, Franz Kafka is dense and provocative. In his exploration of Kafka's work, Friedlander calls on his rich knowledge of Central Europe during Kafka's lifetime. . . A candid and stimulating examination of the forces that shaped Kafka's anguished life/work."-Maron L. Waxman, Jewish Book Council -- Maron L. Waxman * Jewish Book Council * "This book is a clear, uncensorious and serious contribution to the publisher's Jewish Lives series. It is the work of a great historian paying careful attention to a great and disquieting writer."-Robert Eaglestone, Times Higher Education Supplement -- Robert Eaglestone * Times Higher Education Supplement * "This is a book that springs directly from the author's background and from a manifest love for-and great knowledge of-Kafka's work and his milieu. The book's main objective is to mine the question of Kafka's guilt and shame, and Friedlander is more probing, historical and impartial in examining these questions than just about any other scholar I know."-Mark Anderson, author of Reading Kafka and Kafka's Clothes -- Mark Anderson "Friedlander's concise new book, born of both sorrow and affection, is an ideal place to begin among the hulking alps of Kafka studies."-William Giraldi, New Republic -- William Giraldi * New Republic *

Saul Friedlander is a renowned historian of the Holocaust and a Pulitzer Prize-winning author. He is Distinguished Emeritus Professor of History and Club 39 Endowed Chair in Holocaust Studies at UCLA. He lives in Los Angeles, CA.