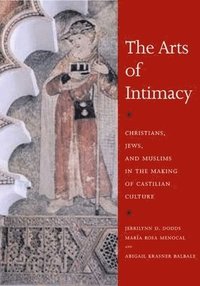 The Arts of Intimacy

Christians, Jews, and Muslims in the Making of Castilian Culture

av Jerrilynn D Dodds, Maria Rosa Menocal, Abigail Krasner Balbale
Häftad Engelska, 2009-07-07
279
Köp
Spara som favorit
Skickas inom 7-10 vardagar.
Fri frakt inom Sverige för privatpersoner.
Finns även som
Visa alla 1 format & utgåvor
A dynamic vision of medieval Castilian culture and the Arabic, Hebrew, and Latin strands that are woven into its fabric Named a Book of the Year by the Times Literary Supplement, this lavishly illustrated work explores the vibrant interaction among different and sometimes opposing cultures, and how their contacts with one another transformed them all. It chronicles the tumultuous history of Castile in the wake of the Christian capture of the Islamic city of Tulaytula, now Toledo, in the eleventh century and traces the development of Castilian culture as it was forged in the new intimacy of Christians with the Muslims and Jews they had overcome. The authors paint a portrait of the culture through its arts, architecture, poetry and prose, uniquely combining literary and visual arts. Concentrating on the eleventh and twelfth centuries, the book reveals the extent to which Castilian identity is deeply rooted in the experience of confrontation, interaction, and at times union with Hebrew and Arabic cultures during the first centuries of its creation. Abundantly illustrated, the volume serves as a splendid souvenir of southern Spain; beautifully written, it illuminates a culture deeply enriched by others.
Visa hela texten

"The compelling story of the complex entangling of Christian, Muslim, and Jewish history, culture, literature and art in medieval Iberia has been told many times before...But it has never been told like this . . . A rich tapestry of a book that brings to vivid life the dialectic of acculturation and assimilation in which medieval Spain's three religious groups were enmeshed."-Jill Ross, Times Higher Education (UK) "This handsomely produced and generously illustrated book explores the praxis of medieval Castilian culture inherited by Catholic kings. . . . [An] impressive work of scholarship. . . . An important addition to the scholarship of medieval Iberia."-Library Journal "[An] ambitious study . . . [with] stunning presentation."-Michael Kerrigan, The Scotsman 'The Critique' "Fascinating . . . by no means a dry scholarly text and there are some extremely funny passages which enrich the book . . . To find that historic link between English Renaissance and 12th century Spain with its Moorish culture . . . is, quite frankly, breathtaking. . . . Certainly, The Arts of Intimacy is, to my mind, a worthy addition to any serious bookshelf."-Richard Edmonds, Birmingham Post ". . . beautiful and gorgeously illustrated. . . . this is a fascinating trawl through a forgotten time."-Catholic Herald "The approach taken by the group of American authors is fresh. . . . The book is beautifully, almost extravagantly, illustrated . . . The Arts of Intimacy and its authors are nonetheless to be applauded for taking up the challenge with brio and the publishers for producing a beautiful book."-Allan Doig, Art and Christianity, February 2010 "Richly illustrated. . . . Deliberately accessible. . . . Through its clear narrative and its elegant style , and thanks to its affordable price, Arts of Intimacy works to render a fascinating and complex topic more widely accessible to a general readership."-Andrea Weisl-Shaw, Medium Aevum Named a Book of the Year by the Times Literary Supplement Short-listed for the ACE/Mercers International Book Award, for making an outstanding contribution to the dialogue between religious faith and the visual arts Winner of the 2010 Albert C. Outler Book Prize given by the American Society of Church History "Jerrilynn D.Dodds, Maria Rosa Menocal, and Abigail Krasner's Balbale's Arts of Intimacy: Christians, Jews, and Muslims in the Making of Castilian Culture stands out in every respect: it is challenging, thorough, and compelling. Its importance lies in conveying the unique cultural and linguistic polyphony of the nascent Castilian culture. Iconographic testimonies from architecture, epigraphy and calligraphy orchestrate the historical voices expressed in an unprecedentedly rich multilingual poetry. A startling and provocative book that puts an end to any essentialist claim to be laid on this exceptional part of Europe."-Angelika Neuwirth "I am sure the Arts of Intimacy was a labor of love for the authors, but for the reader this brilliantly conceived book opens a window onto a marvelous new vista of Muslim Spain. The Islamic political enterprise in al-Andalus collapsed in 1492, and the human survivors of that debacle were soon either expelled or expunged in baptismal fonts across Catholic Spain. Tourists now stand in admiration before the great monuments of once Spanish Islam, the solemn grandeur of the Cordoban Mezquita and the dazzling but ineffably sad rococo of the Alhambra, truly the Moors' last sigh in Spain. But in this happy collaboration of a photographer, an art historian and a belle de letters, we are shown other Islamic monuments in Spain, often silent and unassuming ones, but more popular than the imperial mosque of Cordoba and certainly more essentially revealing than the studied curlicues of the Alhambra. After they had rid themselves of the professed Muslims, the Spanish Christians began feverishly to sc

Bloggat om The Arts of Intimacy

Jerrilynn D. Dodds is distinguished professor and senior faculty advisor to the provost for undergraduate education, City College of New York. She lives in New York City. Maria Rosa Menocal is director, Whitney Humanities Center, and Sterling Professor of the Humanities, Yale University. Her previous book, The Ornament of the World: How Muslims, Jews, and Christians Created a Culture of Tolerance in Medieval Spain, has been translated into seven languages. She lives in New York City. Abigail Krasner Balbale is a candidate for the Ph.D. in history and Middle Eastern studies at Harvard University, where she focuses on the cultural history of medieval Iberia. This is her first book.