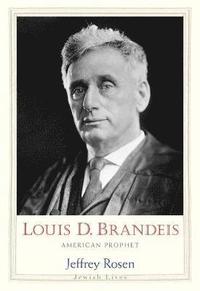 av Jeffrey Rosen
Inbunden Engelska, 2016-08-02
197
Köp
Spara som favorit
Finns även som
Visa alla 1 format & utgåvor
From the prizewinning Jewish Lives series, a riveting new examination of Supreme Court Justice Louis D. Brandeis, the leading progressive justice of his era "Concise and sympathetic. . . . Mr. Rosen persuasively makes his case that recognizing Brandeis as an 'American prophet' . . . 'seems more important today than ever.'"-Adam Cohen, New York Times "An ideal introduction to Brandeis' life for general readers."-Booklist (starred review) According to Jeffrey Rosen, Louis D. Brandeis was "the Jewish Jefferson," the greatest critic of what he called "the curse of bigness," in business and government, since the author of the Declaration of Independence. Published to commemorate the hundredth anniversary of his Supreme Court confirmation on June 1, 1916, Louis D. Brandeis: American Prophet argues that Brandeis was the most farseeing constitutional philosopher of the twentieth century. In addition to writing the most famous article on the right to privacy, he also wrote the most important Supreme Court opinions about free speech, freedom from government surveillance, and freedom of thought and opinion. And as the leader of the American Zionist movement, he convinced Woodrow Wilson and the British government to recognize a Jewish homeland in Palestine. Combining narrative biography with a passionate argument for why Brandeis matters today, Rosen explores what Brandeis, the Jeffersonian prophet, can teach us about historic and contemporary questions involving the Constitution, monopoly, corporate and federal power, technology, privacy, free speech, and Zionism. About Jewish Lives: Jewish Lives is a prizewinning series of interpretative biography designed to explore the many facets of Jewish identity. Individual volumes illuminate the imprint of Jewish figures upon literature, religion, philosophy, politics, cultural and economic life, and the arts and sciences. Subjects are paired with authors to elicit lively, deeply informed books that explore the range and depth of the Jewish experience from antiquity to the present. In 2014, the Jewish Book Council named Jewish Lives the winner of its Jewish Book of the Year Award, the first series ever to receive this award. More praise for Jewish Lives: "Excellent" -New York Times "Exemplary" -Wall Street Journal "Distinguished" -New Yorker "Superb" -The Guardian
Visa hela texten

"A concise and sympathetic exploration of Brandeis's main intellectual causes. . . . Mr. Rosen persuasively makes his case that recognizing Brandeis as an 'American prophet' . . . 'seems more important today than ever.'"-Adam Cohen, New York Times "An elegant and judicious look at the extraordinary jurist whose pioneering opinions on the sanctity of privacy and the dangers of bigness remain pertinent in the era of the internet and of institutions said to be too big to fail."-Geoffrey C. Ward, author of A First-Class Temperament: The Emergence of Franklin Roosevelt "As we debate today's issues of free speech and privacy, or wrestle with the powers of big government and corporations, we should be guided by the wisdom of Brandeis. In this insightful biography, Jeffrey Rosen shows why this visionary philosopher matters today."-Walter Isaacson, President, The Aspen Institute; Author, Benjamin Franklin, Einstein, and Steve Jobs "Rosen's angle on Brandeis is crisp, fresh and incisive, with striking relevance to modern-day issues concerning (among other things) corporate power, the problems of big government, an economy at risk from huge financial institutions that are too big to fail, and the future of Israel as a democratic Jewish state."-Akhil Reed Amar, author of America's Constitution: A Biography

Jeffrey Rosen is President and CEO of the National Constitution Center, professor of law at the George Washington University Law School, and a contributing editor of the Atlantic.