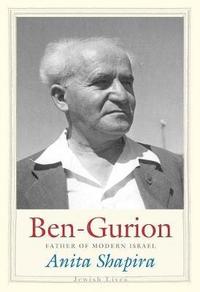 av Anita Shapira
Inbunden Engelska, 2015-01-06
309
Köp
Spara som favorit
Skickas inom 7-10 vardagar.
Gratis frakt inom Sverige över 159 kr för privatpersoner.
Finns även som
Visa alla 1 format & utgåvor
From the prizewinning Jewish Lives series, an insightful study of the inner life of the Zionist leader responsible for the creation of the state of Israel David Ben-Gurion cast a great shadow during his lifetime, and his legacy continues to be sharply debated to this day. There have been many books written about the life and accomplishments of the Zionist icon and founder of modern Israel, but this new biography by eminent Israeli historian Anita Shapira strives to get to the core of the complex man who would become the face of the new Jewish nation. Shapira tells the Ben-Gurion story anew, focusing especially on the period after 1948, during the first years of statehood. As a result of her extensive research and singular access to Ben-Gurion's personal archives, the author provides fascinating and original insights into his personal qualities and those that defined his political leadership. As Shapira writes, "Ben-Gurion liked to argue that history is made by the masses, not individuals. But just as Lenin brought the Bolshevik Revolution into the world and Churchill delivered a fighting Britain, so with Ben-Gurion and the Jewish state. He knew how to create and exploit the circumstances that made its birth possible." Shapira's portrait reveals the flesh-and-blood man who more than anyone else realized the Israeli state. About Jewish Lives: Jewish Lives is a prizewinning series of interpretative biography designed to explore the many facets of Jewish identity. Individual volumes illuminate the imprint of Jewish figures upon literature, religion, philosophy, politics, cultural and economic life, and the arts and sciences. Subjects are paired with authors to elicit lively, deeply informed books that explore the range and depth of the Jewish experience from antiquity to the present. In 2014, the Jewish Book Council named Jewish Lives the winner of its Jewish Book of the Year Award, the first series ever to receive this award. More praise for Jewish Lives: "Excellent" -New York Times "Exemplary" -Wall St. Journal "Distinguished" -New Yorker "Superb" -The Guardian
Visa hela texten

"The most intimate yet unflinching portrait to date of a man revered and reviled. . . . Shapira may be the last truly qualified person to unpack some of the mysteries of Israel's George Washington."-Ilene Prusher, New York Times Book Review "Keenly observed . . . Ms. Shapira tries to shed light on the inner life of the man whom fellow Zionist leader Berl Katznelson called 'history's gift to the Jewish people.'"-Liel Leibovitz, Wall Street Journal "This is an interesting addition to Yale's Jewish Lives series -and Shapira rightly characterises the enigmatic Ben-Gurion as both a revolutionary Jacobin and 'the helmsman of the state.'"-Colin Schindler, Jewish Chronicle "Anita Shapira's concise biography of Ben-Gurion reminds us that the complex issues and factionalism of modern Israeli politics have deep roots."-David Conway, Jewish Renaissance 2015 Silver Medal Winner for the Washington Institute Book Prize given by the Washington Institute for Near East Policy "Anita Shapira portrays David Ben-Gurion as a man who, at some of the most crucial junctures in the whole of Jewish history, led his people, almost alone, by his prophetic foresight, his iron resolution and his fierce sense of reality. Yet, Shapira does not idealize her protagonist: he is portrayed in her brilliant book as a man who was often insensitive to others, ferociously stubborn and incredibly lonely. I read this fascinating book with both intellectual and emotional thrill."-Amos Oz, author of A Tale of Love and Darkness "A beautiful portrayal of a man of exceptional character, whose transcendent love of his people informed his vision."-Shimon Peres, former President of Israel "Shapira unearths new archival sources and provides fresh perspectives. A tour de force and a must read."-Jehuda Reinharz, Brandeis University

Anita Shapira is professor emerita at Tel Aviv University, where she previously served as dean of the Faculty of Humanities and held the Ruben Merenfeld Chair for the Study of Zionism. Her previous books include Israel: A History, winner of the National Jewish Book Award. She lives in Tel Aviv.