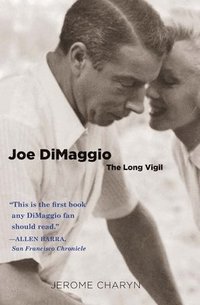 av Jerome Charyn
Häftad Engelska, 2012-04-03
259
Köp
Spara som favorit
Skickas inom 7-10 vardagar.
Fri frakt inom Sverige för privatpersoner.
Finns även som
Visa alla 2 format & utgåvor
This riveting study of Joe DiMaggio offers a more sympathetic look at his life beyond the baseball field, a reversal of how the legendary sports icon has been portrayed in recent years As the New York Yankees' star centerfielder from 1936 to 1951, Joe DiMaggio is enshrined in America's memory as the epitome in sports of grace, dignity, and that ineffable quality called "class." But his career after retirement, starting with his nine-month marriage to Marilyn Monroe, was far less auspicious. Writers like Gay Talese and Richard Ben Cramer have painted the private DiMaggio as cruel or self-centered. Now, Jerome Charyn restores the image of this American icon, looking at DiMaggio's life in a more sympathetic light. DiMaggio was a man of extremes, superbly talented on the field but privately insecure, passive, and dysfunctional. He never understood that for Monroe, on her own complex and tragic journey, marriage was a career move; he remained passionately committed to her throughout his life. He allowed himself to be turned into a sports memorabilia money machine. In the end, unable to define any role for himself other than "Greatest Living Ballplayer," he became trapped in "a horrible kind of minutia." But where others have seen little that was human behind that minutia, Charyn in Joe DiMaggio presents the tragedy of one of American sports' greatest figures.
Visa hela texten

Jerome Charyn is the author of The Secret Life of Emily Dickinson and The Seventh Babe, a novel about a white third baseman on the Red Sox who also played in the Negro Leagues.