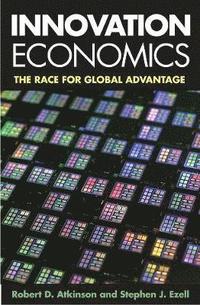 The Race for Global Advantage

av Robert D Atkinson, Stephen J Ezell
Häftad Engelska, 2014-06-03
239
Köp
Spara som favorit
Skickas inom 5-8 vardagar.
Fri frakt inom Sverige för privatpersoner.
Finns även som
Visa alla 1 format & utgåvor
Why America no longer leads the world in innovation, why we should be concerned, and what must be done about it This important book delivers a critical wake-up call: a fierce global race for innovation advantage is under way, and while other nations are making support for technology and innovation a central tenet of their economic strategies and policies, America lacks a robust innovation policy. What does this portend? Robert Atkinson and Stephen Ezell, widely respected economic thinkers, report on profound new forces that are shaping the global economy-forces that favor nations with innovation-based economies and innovation policies. Unless the United States enacts public policies to reflect this reality, Americans face the relatively lower standards of living associated with a noncompetitive national economy. The authors explore how a weak innovation economy not only contributed to the Great Recession but is delaying America's recovery from it and how innovation in the United States compares with that in other developed and developing nations. Atkinson and Ezell then lay out a detailed, pragmatic road map for America to regain its global innovation advantage by 2020, as well as maximize the global supply of innovation and promote sustainable globalization.
Visa hela texten

"'Innovation Economics is a valuable book. The authors are right to warn that America's leadership in several areas has eroded much more rapidly than most Americans think. They are right to argue that classical economists are often blind to the fact that innovation is the product of ecosystems rather than individual companies and that ecosystems are fragile. They are also right to worry that "innovation mercantilism" can be much more harmful to its targets than traditional mercantilism.' (Business Books Quarterly Review, The Economist) 'Robert D. Atkinson and Stephen J. Ezell forcefully present the argument for the exceptional role that science and technology play in the economy. In their book, Mr. Atkinson and Mr. Ezell define innovation as not only the generation of new ideas but also as their adoption in new products, processes, services and organizational models. In their view, the goal of policy should be to invest in and nurture the development of the innovation pipeline, from basic science to commercialization.' (Steve Lohr, The New York Times)"

Robert D. Atkinson is president of the Information Technology and Innovation Foundation and one of the world's foremost thinkers on innovation economics. Stephen J. Ezell is senior analyst at ITIF.