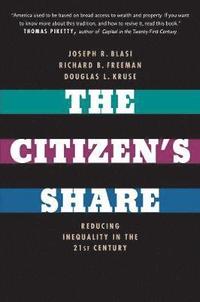 Reducing Inequality in the 21st Century

av Joseph R Blasi, Richard B Freeman, Douglas L Kruse
Häftad Engelska, 2014-10-03
219
Köp
Spara som favorit
Skickas inom 7-10 vardagar.
Fri frakt inom Sverige för privatpersoner.
A compelling argument for broad-based profit sharing and employee ownership in keeping with the economic vision of America's Founders The idea of workers owning the businesses where they work is not new. In America's early years, Washington, Adams, Jefferson, and Madison believed that the best economic plan for the Republic was for citizens to have some ownership stake in the land, which was the main form of productive capital. This book traces the development of that share idea in American history and brings its message to today's economy, where business capital has replaced land as the source of wealth creation. Based on a ten-year study of profit sharing and employee ownership at small and large corporations, this important and insightful work makes the case that the Founders' original vision of sharing ownership and profits offers a viable path toward restoring the middle class. Blasi, Freeman, and Kruse show that an ownership stake in a corporation inspires and increases worker loyalty, productivity, and innovation. Their book offers history-, economics-, and evidence-based policy ideas at their best.
Visa hela texten

"Important and insightful. . . . Offers history-, economics-, and evidenced-based policy ideas at their best."-Politico * Politico * "[A] thought-provoking addiction to the literature, given the current debates on economic inequality."-Choice * Choice * "Three professors would rather see income flowing into the hands of the many, and they've written a book to point the way. . . . 'The outstanding faults of the economic society in which we live are its failure to provide for full employment and its arbitrary and inequitable distribution of wealth and incomes.' Keynes wrote those words about England in 1936. To deal with the same faults, America needs more 'citizen's shares' in 2014."-Gerald E. Scorse, Baltimore Chronicle and Sentinel -- Gerald E. Scorse * Baltimore Chronicle and Sentinel * "One of the big frustrations about income inequality is that when corporate profits grow, they aren't shared equally-typical employees sees very little from it, while the people at the top, and big investors, reap most of the rewards. . . . One solution? Give average workers direct ownership in the company and its profits. . . . [A] new book called The Citizen's Share advocates government tax incentives to encourage companies to introduce profit-sharing and stock-ownership programs for their employees, or expand the programs they already have. . . . The authors argue that increased ownership and a share in profits may be the key to reviving the American middle class."-David Parkinson, Economy Lab, Toronto Globe and Mail -- David Parkinson * Economy Lab, Toronto Globe and Mail * "Employee ownership-profit sharing, stock sharing and other employee-ownership plans-can increase your workers' productivity and innovation. Research shows that workers at companies with employee ownership plans work harder, are more creative and more loyal. That translates into better company performance. 'The impacts are larger when the programs are larger, as in many closely held ESOP companies and some model publicly traded companies,' say Rutgers professors Joseph Blasi and Douglas Kruse and Harvard economist Richard Freeman, in their new book The Citizen's Share."-Michael Kling, Entrepreneur Magazine -- Michael Kling * Entrepreneur Magazine * "George Washington liked the basic idea, as did Thomas Jefferson. We should build on our rich national tradition of support for widespread asset ownership. Joseph Blasi, Richard Freeman and Douglas Kruse develop this proposition in a new book, The Citizen's Share, which lends historical perspective to their empirical research on shared capitalism."-Nancy Folbre, Economix, The New York Times -- Nancy Folbre * Economix, The New York Times * "The Citizens Share demonstrates that employee ownership is as American as apple pie. Let's put it to use to improve our lives and strengthen our democracy. The authors do a superb job of showing the way to do so."--Thomas A. Kochan, Co-Director, MIT Institute for Work and Employment Research -- Thomas Kochan "Rutgers management professors Joseph Blasi and Douglas Kruse and Harvard economics professor Richard Freeman wrote The Citizen's Share. . . . They argued that worker ownership had a long history in the American economy and a long history of bipartisan and cross-ideological support. . . . One proposal to implement [their] strategy would be to have state and federal governments link corporate tax rates to the extent of the companies' profit sharing: The more that's shared, the lower the rate."-Harold Meyerson, The American Prospect -- Harold Meyerson * The American Prospect * "The Citizen's Share is a must-read for current and future business leaders as well as policymakers who believe all American's are entitled to participate in a healthy and growing U.S. economy. This insightful tapestry of history, economics and psychology begins by telling the story that our country was founded with the right for a

Joseph R. Blasi, J. Robert Beyster Professor and sociologist, and Douglas L. Kruse, professor and economist, are both at the School of Management and Labor Relations, Rutgers University. Richard B. Freeman is Herbert Ascherman Professor of Economics at Harvard University.