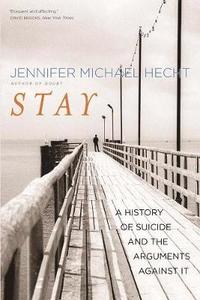 A History of Suicide and the Arguments Against It

av Jennifer Michael Hecht
Häftad Engelska, 2015-03-17
249
Köp
Spara som favorit
Skickas inom 7-10 vardagar.
Gratis frakt inom Sverige över 159 kr för privatpersoner.
Finns även som
Visa alla 1 format & utgåvor
A leading public critic reminds us of the compelling reasons people throughout time have found to stay alive Worldwide, more people die by suicide than by murder, and many more are left behind to grieve. Despite distressing statistics that show suicide rates rising, the subject, long a taboo, is infrequently talked about. In this sweeping intellectual and cultural history, poet and historian Jennifer Michael Hecht channels her grief for two friends lost to suicide into a search for history's most persuasive arguments against the irretrievable act, arguments she hopes to bring back into public consciousness. From the Stoics and the Bible to Dante, Shakespeare, Wittgenstein, and such twentieth-century writers as John Berryman, Hecht recasts the narrative of our "secular age" in new terms. She shows how religious prohibitions against self-killing were replaced by the Enlightenment's insistence on the rights of the individual, even when those rights had troubling applications. This transition, she movingly argues, resulted in a profound cultural and moral loss: the loss of shared, secular, logical arguments against suicide. By examining how people in other times have found powerful reasons to stay alive when suicide seems a tempting choice, she makes a persuasive intellectual and moral case against suicide.
Visa hela texten

"Eloquent and affecting."-David Brooks, New York Times "Hecht is an intellectual historian and a poet, and her writing reflects both disciplines: The book is rigorous and deeply rewarding, both accessible and challenging. . . . She finds common threads: sympathy for life's difficulty, yet a plea to stay, for the sake of one's community and even for one's future self."-Kate Tuttle, Boston Globe "A history not only of suicide, but how we think about suicide. . . . Hecht proposes her own argument against suicide in the secular, modern world, presenting a humanist call for life. . . . Her final plea to the suicidal gives the book its title: she urges them to simply 'stay.'"-Thomas Flynn, The Daily Beast "The author of the best-selling Doubt offers a history of suicide and of arguments against it. . . . Even Camus, who found the search for meaning as absurd as pushing the same boulder up a cliff every day, urged his readers to 'imagine Sisyphus happy,' and to live."-New Yorker "Hecht's intentions are patently generous and benign. She wants to save young lives that seem needlessly lost . . . On these counts her book merits praise."-John Carey, The Sunday Times "While not insensitive to people who use suicide as a way to end the suffering of terminal illness, Hecht brands suicide an immoral act that robs society - and the self-killer - of a life that is certainly more valuable than what it may seem in that dark moment. It solves nothing, complicates everything. . . . Her argument is that it - whatever dark truth that pronoun signifies - almost always gets better."-Newsweek "Suicide as a concept has been praised, defended, and vilified in various contexts throughout history as poet and scholar Hecht (Doubt: A History) painstakingly illustrates in this nuanced and unsettling work, whose title acts as a rallying refrain throughout. . . . The book's conclusions are hopeful. Gratitude is owed to those who reject suicide, according to Hecht, not only by the community but also by one's 'future self' who may be days, months, or years away. Like death, life can inspire, because one's 'ideas matter.'"-Publishers Weekly "One cannot but be impressed by Hecht's breadth of knowledge, mostly expressed with a light touch, and there are many fascinating details."-Oliver James, The Independent "When I review a book I underline special passages, stick post-it notes and write comments in the margin. By that token this one has inspired me more than anything I've read in a very long time. Full of life and spirit and hope, and deeply moving, it communicates a generous love of suffering, flawed humanity. I cannot praise it highly enough."-Bel Mooney, Daily Mail "Hecht's aim is to show that as suicide was secularised, it became too easy - a mere medical and therefore solipsistic condition which took no account of humans as members of a larger (caring) community. She wants to revitalise the idea that suicide is wrong, harms others and 'damages humanity.' No man or woman, even today, is an island."-Lisa Appignanesi, The Observer "Stay is passionate, sincere, well-researched, well written and commendably honest."-Nick Spencer, The Tablet "The title of this book is an imperative against the departure that is suicide, and its contents provide a learned, illuminating look at the history of what is perhaps the darkest secret in all of human behavior."-Billy Collins "Jennifer Michael Hecht addresses the problem of suicidal nihilism with intellectual sophistication and poetic subtlety. An impassioned defense of life and rejection of self-slaughter (as Hamlet termed it), Stay is an important book."-David Lehman, Editor, The Oxford Book of American Poetry "The perfect vehicle for an informed conversation about the virtues and vices of suicide, this book will literally save lives."-Stephen Prothero, author of The

Jennifer Michael Hecht is a historian of science and culture and a poet. She has written seven books, including the best-selling Doubt: A History, the story of unbelief across the world. Hecht teaches at The New School and lives in Brooklyn.