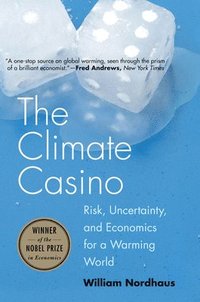 Risk, Uncertainty, and Economics for a Warming World

av William D Nordhaus
Häftad Engelska, 2015-04-07
179
Köp
Spara som favorit
Finns även som
Visa alla 2 format & utgåvor
The 2018 Nobel laureate for economics analyzes the politics and economics of the central environmental issue of today and points the way to real solutions Climate change is profoundly altering our world in ways that pose major risks to human societies and natural systems. We have entered the Climate Casino and are rolling the global-warming dice, warns economist William Nordhaus. But there is still time to turn around and walk back out of the casino, and in this essential book the author explains how. Bringing together all the important issues surrounding the climate debate, Nordhaus describes the science, economics, and politics involved-and the steps necessary to reduce the perils of global warming. Using language accessible to any concerned citizen and taking care to present different points of view fairly, he discusses the problem from start to finish: from the beginning, where warming originates in our personal energy use, to the end, where societies employ regulations or taxes or subsidies to slow the emissions of gases responsible for climate change. Nordhaus offers a new analysis of why earlier policies, such as the Kyoto Protocol, failed to slow carbon dioxide emissions, how new approaches can succeed, and which policy tools will most effectively reduce emissions. In short, he clarifies a defining problem of our times and lays out the next critical steps for slowing the trajectory of global warming.
Visa hela texten

"A one-stop source on global warming, seen through the prism of a brilliant economist."-Fred Andrews, New York Times Selected as one of the best books of 2013 in the Financial Times "Nordhaus is arguably the world's leading thinker on the economics of global warming. . . . His conclusion is clear: Acting to stop climate change costs money. Ignoring the problem costs more. . . . Ultimately, this message, delivered by a number-crunching economist rather than a morally outraged environmentalist, may prove far more effective in making the case for action."-Coral Davenport, The New York Times Book Review "When we have a disjunction between scientific consensus and popular perception-that should light a fire under those of us in the news media. An excellent basis for discussion is the new book The Climate Casino by William Nordhaus."-Nicholas Kristof, New York Times "Provides a comprehensive stocktaking of the possibilities and consequences of global climate change, all of which can be summed up in one sentence: 'Global warming is a trillion-dollar problem requiring a trillion-dollar solution.'"-Sheridan Jobbins, World Economic Forum "Few economists have worked as hard on such problems as William Nordhaus and in this new book, he's on top form."-Jonathan Wright, Geographical Magazine "The economic focus of this book should provide a valuable insight into the challenges and barriers that must be overcome for planners and policy makers."-Alexander Waller, The Biologist "Intriguing, captivating reading" -Anna Maria Polidori, AlFemminile Blogspot Won an Honorable Mention for the 2013 New England Book Festival given by the JM Northern Media Family of Festivals, in the General Non-Fiction Category Winner of the 2013 American Publishers Awards for Professional and Scholarly Excellence (PROSE), in the Economics category "Nordhaus is the world's clearest, best informed and most serious thinker on climate change policy. There is more insight and good sense advice in this volume than in many libraries. This book should be as central to climate policy debates as climate change is to humanity's future."-Lawrence H. Summers, Charles W. Eliot University Professor and President Emeritus at Harvard University "Bill Nordhaus is one of the world's pioneers in applying economic reasoning to the harrowing problem of climate change. Before there was the UN climate treaty, the recent rounds of IPCC reports, and the Stern Review, there was Nordhaus' path-breaking thinking, modeling, and research on the subject. His new book, The Climate Casino, marks a long-awaited update and synthesis of this work for the public and students everywhere. His core conclusion - that we must act and act now - is carefully explained with Nordhaus' trademark vigor, clarity, and thoughtfulness. Nordhaus repeatedly and rightly reminds the reader of the risks of catastrophic tipping points and the huge unknowns concerning the ability of societies and ecosystems to adapt to the changes ahead. As he aptly puts it, by investing in slowing and eventually halting the emission of greenhouse gases humanity will be paying a well-justified 'insurance premium' for human wellbeing."-Jeffrey D. Sachs, The Earth Institute at Columbia University "The Climate Casino is one of the most important books ever written about global warming . . . it deals with the problem (climate change and its consequences including economic) and with the solution (primarily a suitable price for carbon). It does so with wonderful clarity."-Thomas E. Lovejoy, George Mason University and The H. John Heinz Center for Science, Economics, and the Environment "The Climate Casino is a tour de force and will make a real impact in the popular literature on climate change . . . it brings together all of the important strands of the debate . . . the book is without peer."-Charles Kolstad, Stanford Univers

William Nordhaus, winner of the 2018 Nobel Prize in Economics and Sterling Professor of Economics at Yale University, has studied and written extensively about global warming for four decades. He lives in New Haven, CT.