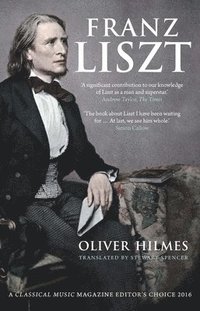 av Oliver Hilmes
Häftad Engelska, 2018-05-04
199
Köp
Spara som favorit
Skickas inom 10-15 vardagar.
Fri frakt inom Sverige för privatpersoner.
Beställ senast imorgon kl 17:30 för leverans innan jul!
Finns även som
Visa alla 1 format & utgåvor
An engrossing new biography of the musical revolutionary who was the world's first international megastar Hungarian composer Franz Liszt (1811-1886) was an anomaly. A virtuoso pianist and electrifying showman, he toured extensively throughout the European continent, bringing sold-out audiences to states of ecstasy while courting scandal with his frequent womanizing. Drawing on new, highly revealing documentary sources, including a veritable treasure trove of previously unexamined material on Liszt's Weimar years, best-selling author Oliver Hilmes shines a spotlight on the extraordinary life and career of this singularly dazzling musical phenomenon. Whereas previous biographies have focused primarily on the composer's musical contributions, Hilmes showcases Liszt the man in all his many shades and personal reinventions: child prodigy, Romantic eccentric, fervent Catholic, actor, lothario, celebrity, businessman, genius, and extravagant show-off. The author immerses the reader in the intrigues of the nineteenth-century European glitterati (including Liszt's powerful patrons, the monstrous Wagner clan) while exploring the true, complex face of the artist and the soul of his music. No other Liszt biography in English is as colorful, witty, and compulsively readable, or reveals as much about the true nature of this extraordinary, outrageous talent.
Visa hela texten

". . . makes a significant contribution to our knowledge of Liszt as a man and superstar. Hilmes shines a light into the shadows behind a life lived in the spotlight, and he finds some surprising and indeed entertaining details there."-Andrew Taylor, Times "If this book has a once-over-lightly feel, that is because there were many intertwined strands in Liszt's extraordinary life, each of which could merit a book in itself. . . . Hilmes is illuminating on the emergence-and continuance into old age-of Liszt's preternatural gifts as a pianist. And by drawing on hitherto unpublished documentary sources he provides a riveting chronicle of the composer's tangled relationships."-Economist "[It] has the great virtue of objectivity, and with the help of Stewart Spencer's nicely fluent translation, Hilmes does a solid and fair-minded job of charting the long career of one of the dominant and iconic figures of 19th century culture-a romantic in every sense of the word."-Rupert Christiansen, Literary Review ". . . Hilmes offers a riveting read, a vibrant story full of cannily etched detail. In the end you feel you have been visiting the characters at home, observing with forensic exactitude all their foibles, neuroses and, sometimes, hideous cruelty."-Jessica Duchen, Sunday Times Ireland "As a well-told, readable, fluently translated story of a strangely conflicted career that affected the lives of people as disparate as Lola Montez and Pope Pius IX [Franz Liszt] would be hard to beat."-Stephen Walsh, London Review of Books "The sub-title of this remarkable book at once tells you where Oliver Hilmes' chief interest lies. Liszt was, indeed, all of these things, bewilderingly multi-faceted and of super-human strength and achievement. Yet he also paid a heavy price in his journey from 'Le petit Litz' to 'Le Grand Liszt.'"-Susan Nickalls, Classical Music "Editors Choice 2016" "[A] new and vivid study of the great composer-pianist . . . imparts a novelistic vibrancy and urgency of narrative to a life that was undeniably of great intrinsic interest."-Andrew Thomson, Musical Times Won the 2017 Choice Award for Outstanding Academic Title "This is the book about Liszt I have been waiting for, vividly evoking both him and his context to reveal him as one the central figures-if not the central figure-of Western music in the nineteenth century, a vital link between Beethoven and Bartok, and a truly great and generous man. At last, we see him whole."-Simon Callow