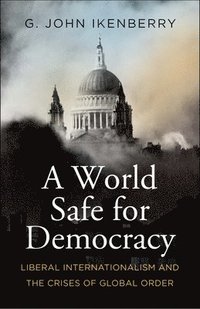 A World Safe for Democracy

Liberal Internationalism and the Crises of Global Order

Shortlisted for the 2021 Arthur Ross Book Award, sponsored by the Council on Foreign Relations "John Ikenberry once more shows why he remains the most intelligent and most articulate defender of a world built over two centuries by Britain and the United States. Yet another tour de force by one of the most important voices in international relations today."-Michael Cox, Emeritus Professor of International Relations, London School of Economics "The foremost proponent of liberalism amongst current international relations scholars has delivered a timely and penetrating critical assessment of liberalism's origins, development, contradictions, and prospects. This book is a thoughtful and valuable counterweight to the shallow and seductive blandishments of both populists and authoritarians."-Barry Buzan, London School of Economics and Political Science "A World Safe for Democracy is a wide-ranging and masterly genealogy of liberal internationalism. While outlining the serious crises liberal internationalism faces today, Ikenberry presents an eloquent plea for its value and a thoughtful prescription for its survival."-Michael Doyle, Columbia University "John Ikenberry is the preeminent theorist of liberal internationalism in the world. A World Safe for Democracy is the product of decades of study, including thoughtful and honest debates with realist and revisionist critiques of the liberal international order. The book couldn't be more timely. . . . A must-read."-Anne-Marie Slaughter, CEO, New America "At a time when the liberal internationalist project is under sustained attack, a rigorous defense of it by a leading scholar is greatly to be welcomed. With deep research and careful analysis, John Ikenberry shows how the liberal world has worked in the past and can be made to work in the current era."-Robert Jervis, author of How Statesmen Think

G. John Ikenberry is the Albert G. Milbank Professor of Politics and International Affairs at Princeton University, as well as a Global Scholar at Kyung Hee University, South Korea. His books include Liberal Leviathan and After Victory.