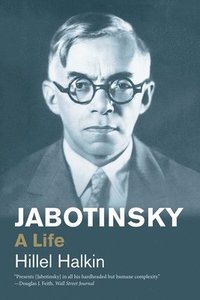 av Hillel Halkin
Häftad Engelska, 2019-05-03
199
Köp
Spara som favorit
Finns även som
Visa alla 2 format & utgåvor
An insightful new biography of the most controversial and perhaps most fervent of all Zionist political figures Vladimir Jabotinsky (1880-1940) was a man of huge paradoxes and contradictions and has been the most misunderstood of all Zionist politicians--a first-rate novelist, a celebrated Russian journalist, and the founder of the branch of Zionism now headed by Benjamin Netanyahu. This biography, the first in English in nearly two decades, undertakes to answer central questions about Jabotinsky as a writer, a political thinker, and a leader. Hillel Halkin sets aside the stereotypes to which Jabotinsky has been reduced by his would-be followers and detractors alike. Halkin explains the importance of Odessa, Jabotinsky's native city, in molding his character and outlook; discusses his novels and short stories, showing the sometimes hidden connections between them and Jabotinsky's political thought, and studies a political career that ended in tragic failure. Halkin also addresses Jabotinsky's position, unique among the great figures of Zionist history, as both a territorial maximalist and a principled believer in democracy. The author inquires why Jabotinsky was often accused of fascist tendencies though he abhorred authoritarian and totalitarian politics, and investigates the many opposed aspects of his personality and conduct while asking whether or not they had an ultimate coherence. Few figures in twentieth-century Jewish life were quite so admired and loathed, and Halkin's splendid, subtle book explores him with empathy and lucidity.
Visa hela texten

"Mr. Halkin's book presents [Jabotinsky] in all his hardheaded but humane complexity."-Douglas J. Feith, Wall Street Journal "Concise and highly readable."-Daniel Tauber, Jerusalem Post "A revelatory exploration of Vladimir Jabotinsky."-Colin Shindler, Jewish Chronicle "Halkin's exquisite translation strikingly reveals the personal side of a man so often vilified in the press for his uncompromising political stands. In a similar way, Halkin's literary criticism offers unparalleled insights into little known aspects of Jabotinsky's career, and his discussion of the Jabotinsky's novel, The Five . . . is probably the best analysis of the novel to date."-Louis Gordon,Times of Israel "The author uses Jabotinsky's literary works to analyze his character. At the outset, Halkin describes for the reader the problems of Eastern European Jewry, while creating a link to Jabotinsky and events that influenced and shaped his views. In so doing, he creates a broad perspective on Jabotinsky's character and the events in his life. The book is unique in that Halkin enables readers to understand the link between Jabotinsky's literary writings, his political ideas, and his lifestyle."-Israel Journal of Foreign Affairs "This is a revelatory exploration of Vladimir Jabotinsky, 'father of the Israeli right.' . . . Halkin has done his research well . . . his well-crafted and fascinating book has added a new dimension to the serious study of Jabotinsky as a pivotal figure in Zionism."-Colin Shindler, Jewish Chronicle "Filled in the many gaps in my knowledge and provides excellent insight into the character of Jabotinsky...It is a fascinating and very rewarding read."-Max Blackston, Birmingham Jewish Recorder

Hillel Halkin is a writer, critic, and translator. He is the author of Letters to an American Jewish Friend and Yehuda Halevi, both of which won the National Jewish Book Award. His most recent book is Melisande! What Are Dreams? He lives in Israel.