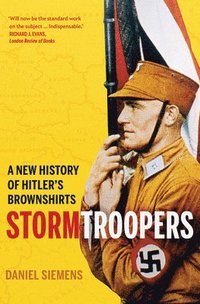 A New History of Hitler's Brownshirts

av Daniel Siemens
Häftad Engelska, 2019-07-02
149
Köp
Spara som favorit
Fåtal ex i lager. Skickas inom 1-2 vardagar.
Fri frakt inom Sverige över 159 kr för privatpersoner.
Finns även som
Visa alla 2 format & utgåvor
The first full history of the Nazi Stormtroopers whose muscle brought Hitler to power, with revelations concerning their longevity and their contributions to the Holocaust Germany's Stormtroopers engaged in a vicious siege of violence that propelled the National Socialists to power in the 1930s. Known also as the SA or Brownshirts, these "ordinary" men waged a loosely structured campaign of intimidation and savagery across the nation from the 1920s to the "Night of the Long Knives" in 1934, when Chief of Staff Ernst Roehm and many other SA leaders were assassinated on Hitler's orders. In this deeply researched history, Daniel Siemens explores not only the roots of the SA and its swift decapitation but also its previously unrecognized transformation into a million-member Nazi organization, its activities in German-occupied territories during World War II, and its particular contributions to the Holocaust. The author provides portraits of individual members and their victims and examines their milieu, culture, and ideology. His book tells the long-overdue story of the SA and its devastating impact on German citizens and the fate of their country.
Visa hela texten

"Weighty, well argued, thorough and deeply researched."-Richard J. Evans, London Review of Books "[An] excellent new history of the Sturmableilungen. . . a convincing thesis, supported with immense scholarship and research in national, regional, and local archives, providing a rich and detailed history." -Taylor Downing, Military History Monthly "Brings a genuine rigour to the subject. He is not content simply to retread the stereotypical, half-formed narrative of the SA. . . Siemens portrays the SA as an integral part of the Nazi vision for society." -Roger Moorhouse, BBC History "Quite simply, this is the best book on its subject"-David Marx, DavidMarxBookReviews "There is no doubt that it should be highly recommended reading for anyone interested in Nazi Germany." -Katrin Paehler, German Studies Review "Siemens's work will go a long way to correcting and deepening our understanding of the SA. He has produced an original and comprehensive study that successfully repositions the importance of the Hitler's Stormtroopers in the history of the Third Reich."-Deborah Barton, The English Historical Review Winner of the Outstanding Academic Title for 2018 award sponsored by Choice "This excellent and original book is a tour de force, original, scholarly, and readable, as well as being informed by a solid grounding in the latest theoretical literature. I recommend it with great enthusiasm." Robert Gellately, author of Backing Hitler: Consent and Coercion in Nazi Germany "An excellent contribution to the vast literature on Nazi Germany. Based on meticulous research, Daniel Siemens' Stormtroopers is not only the most comprehensive but also the best history of Hitler's Brownshirts available in any language." Robert Gerwarth, author of Hitler's Hangman "A definitive study of the Stormtroopers. It offers genuinely new perspectives, integrating the familiar story of SA violence with the important history of that organization from 1934 to 1945. Quite simply, this is the best book on its subject." Richard Bessel, author of Germany 1945 "Daniel Siemens demonstrates in this excellent piece of scholarship that the SA did not, as is often assumed, fade into insignificance after the Night of the Long Knives in 1934 but continued to function until the very last days of the war and played a significant role in the Holocaust, in the Occupied Territories and on the home front. Thoroughly researched and very readable, Siemens has made an important contribution to our understanding of an often ignored aspect of the Third Reich." Adrian Weale, author of The SS "For the foreseeable future, Daniel Siemens's study will be the book of reference on the National Socialist stormtroopers." Professor Michael Wildt, Humboldt University Berlin

Daniel Siemens is professor of European history at Newcastle University. He is the author of three previous books and has published widely on European and U.S. history of the nineteenth and twentieth centuries.