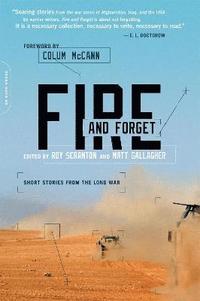 Short Stories from the Long War

av Matt Gallagher, Roy Scranton, Colum McCann, Siobhan Fallon, Colby Buzzell
Häftad Engelska, 2013-02-12
149
Köp
Spara som favorit
Fire and Forget includes the title story from Redeployment by Phil Klay, 2014 National Book Award Winner in FictionThese stories aren't pretty and they aren't for the faint of heart. They are realistic, haunting and shocking. And they are all unforgettable. Television reports, movies, newspapers and blogs about the wars in Iraq and Afghanistan have offered images of the fighting there. But this collection offers voices- powerful voices, telling the kind of truth that only fiction can offer.What makes the collection so remarkable is that all of these stories are written by those who were there, or waited for them at home. The anthology, which features a Foreword by National Book Award winner Colum McCann, includes the best voices of the wars' generation: award-winning author Phil Klay's Redeployment" Brian Turner, whose poem Hurt Locker" was the movie's inspiration Colby Buzzell, whose book My War resonates with countless veterans Siobhan Fallon, whose book You Know When the Men Are Gone echoes the joy and pain of the spouses left behind Matt Gallagher, whose book Kaboom captures the hilarity and horror of the modern military experience and ten others.
Visa hela texten

Street Roots, 2/28/13 "Representing a new generation of veterans-turned-authors, the contributors in Fire and Forget have returned home, at least physically, and are now sharing their works and sculpting the public's perception of these wars and how they've impacted the warriors...Fire and Forget is an effective cultural text on multiple levels. Not only does it serve as a historical milepost, reminding us that we are waging the longest war in ou Tottenville Review, 5/22/13 "Every one of the voices in Fire and Forget rises to the challenge, and, as each gains in force and measure, the fog of war may clear." The Millions, 6/4/13 "The best fictional account of the wars of the last decade and the contemporary military experience...Fresh, raw, and vital. It is a rare thing for a book to live up to its blurb, but E.L. Doctorow got it right when he called this a 'necessary' collection." "A visceral, all-too-real collection of short stories by veterans of the wars in Iraq and Afghanistan...This is fiction as good as any you'll read anywhere...These pages contain a record of the cost of our excursions abroad that is as illustrative as any culture can produce." Barnes and Noble Review, 2/15/13 "These rousing 'Short Stories of the Long War' are uniquely resonant." War on Terror News, 2/13/13 "Probably the best single representation of Iraq and Afghanistan-fiction that's currently available. Novels like Fobbit and The Yellow Birds have done their part well--but one author's voice can only go so far." Military Times, 1/6/2014 "You are unlikely to forget this fine fiction by 14 veterans and a veteran's spouse. Known writers...contribute three of the 15 stories in this collection. Their work is solid but Fire also succeeds because of names the book introduces." Penthouse, February 2014 "The 15 works of fiction in this collection are powerful, poignant, and at times painful tales of the truths of war, written by men and women who were there--and one wife who was left behind." The Massachusetts Review website, January 2014 "Fire and Forget has lessons we civilians have yet to learn." Word & Film, 2/5/15 "Offer[s] diverse experiences of those affected by--and fighting--the Global War on Terror." The Rumpus, 9/26/16 "One of the first short story collections of fiction derived from the recent wars." Military Success Network, 2/12/13 "Its pages feature unique but iconic stories of war, homecoming, and the struggle for meaning in both...This collection paints a startling and bleak picture of Long War veterans and their lives during and after combat...That said, the voices of Fire and Forget ring true in their cynicism, pain, and humor. This is an important collection of fiction, not only because of its current-day relevancy, but also because of the strength of its diverse voices, all engaged in a search for truth among the desert sands of fiction and memory. It should not be missed by anyone with an interest in modern war or the veteran experience." Acolytes of War, 1/21/13 "Whether portraying the fantastical or the banal, the in-theater tales feature grunts' eye perspectives on deployment, far from the sterile perspectives recounted in more official histories, memoirs, journalism, and government pronouncements...Hat's off to all the Fire and Forget authors and editors." ForeWord, Spring 2013 "Deeply insightful...The writing is vivid and compelling, artfully selected by the editors...An important book...This collection deserves to be read." Internet Review of Books, 1/25/13 "As might be expected, these stories are intense; it's hard to read many of them in a single session. Yet contrary to expectations there's not much sameness in the telling. Each man or woman has his/her own story, each one unique. These are voices we all need to hear." East Bay Express, 2/5/13 "[A] remarkable collection...Not