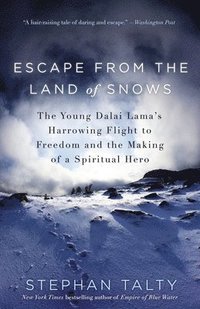 Escape from the Land of Snows: The Young Dalai Lama's Harrowing Flight to Freedom and the Making of a Spiritual Hero

av Stephan Talty
Häftad Engelska, 2012-02-01
209
Köp
Spara som favorit
Skickas inom 7-10 vardagar.
Gratis frakt inom Sverige över 159 kr för privatpersoner.
On the evening of March 17, 1959, as the people of Tibet braced for a violent power grab by Chinese occupiers-one that would forever wipe out any vestige of national sovereignty-the twenty-four-year-old Dalai Lama, Tibet's political and spiritual leader, contemplated the impossible. The task before him was immense: to slip past a cordon of crack Chinese troops ringing his summer palace and, with an escort of 300, journey across the highest terrain in the world and over treacherous Himalayan passes to freedom-one step ahead of pursuing Chinese soldiers.

Mao Zedung, China's ruthless Communist dictator, had pinned his hopes for total Tibetan submission on controlling the impressionable Dalai Lama. So beloved was the young ruler-so identified with his country's essence-that for him to escape might mean perpetual resistance from a population unwilling to tolerate an increasingly brutal occupation. The Dalai Lama's minders sent word to the Tibetan rebels and CIA-trained guerrillas who waited on the route: His Holiness must escape-at all costs.

In many ways, the 14th Dalai Lama, Tenzin Gyatso, was unprepared for the epic journey awaiting him. Twenty-two years earlier, government search parties, guided by prophecies and omens, had arrived at the boy's humble peasant home and subjected the two-year-old to a series of tests. After being declared the reincarnation of Tibet's previous ruler, the boy was brought to Lhasa to learn the secrets of Buddhism and the ways of ultimate power. Forced in the ensuing two decades to cope with aching loneliness and often stifling ritual-and compelled to suppress his mischievous personality-Gyatso eventually proved himself a capable leader. But no previous Dalai Lama had ever taken on a million Communist Chinese soldiers bent on stamping out Tibetan freedom.

To keep his country's dream of independence alive by means of a government in exile, the young ruler would not only have to brave battalions of enemy soldiers and the whiteout conditions waiting on the slopes of the Himalayas' highest peaks, he'd have to overcome a different type of blindness: the naïveté intrinsic to his sheltered palace life and his position as leader of a people who considered violence deeply taboo.

His mind made up, the young Dalai Lama set off on his audacious journey to India while behind him a Chinese army rolled over Lhasa, its advance hunter patrols in fierce pursuit of the man they most coveted. The 14th's escape was an act of daring and defiance that represented Tibet's last hope, and so the world watched, transfixed, as the gentle monk's journey unfolded.

Emotionally powerful and irresistibly page-turning, Escape from the Land of Snows is simultaneously a portrait of the inhabitants of a spiritual nation forced to take up arms in defense of their ideals, and the saga of an initially childlike ruler who at first wore his monk's robes uncomfortably but was ultimately transformed by his escape into the towering figure the world knows today-a charismatic champion of free thinking and universal compassion.