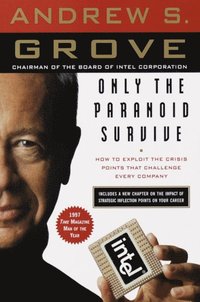 Only the Paranoid Survive (e-bok)

How to Exploit the Crisis Points That Challenge Every Company

av Andrew S Grove
E-bok (EPUB - DRM), Engelska, 2010-05-05
129
Ladda ned
Spara som favorit
Laddas ned direkt
Läs i vår app för iPhone, iPad och Android
Andy Grove, founder and former CEO of Intel shares his strategy for success as he takes the reader deep inside the workings of a major company in Only the Paranoid Survive.Under Andy Grove's leadership, Intel became the world's largest chip maker and one of the most admired companies in the world. In Only the Paranoid Survive, Grove reveals his strategy for measuring the nightmare moment every leader dreads--when massive change occurs and a company must, virtually overnight, adapt or fall by the wayside--in a new way. Grove calls such a moment a Strategic Inflection Point, which can be set off by almost anything: mega-competition, a change in regulations, or a seemingly modest change in technology. When a Strategic Inflection Point hits, the ordinary rules of business go out the window. Yet, managed right, a Strategic Inflection Point can be an opportunity to win in the marketplace and emerge stronger than ever.Grove underscores his message by examining his own record of success and failure, including how he navigated the events of the Pentium flaw, which threatened Intel's reputation in 1994, and how he has dealt with the explosions in growth of the Internet. The work of a lifetime, Only the Paranoid Survive is a classic of managerial and leadership skills.
Visa hela texten