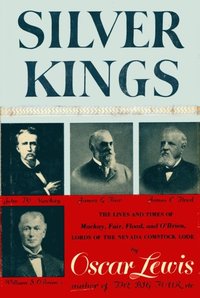 av Oscar Lewis
E-bok (EPUB - DRM), Engelska, 2012-12-05
199
Ladda ned
Spara som favorit
Laddas ned direkt
Läs i vår app för iPhone, iPad och Android
Thousands of readers remember with pleasure Oscar Lewis?s fine book on the Western railroad robber barons, The Big Four. Silver Kings is a companion piece, dealing as it does with the big four of the Nevada Comstock Lode, one of the greatest of all silver mines. These were really fabulous men who led strangely fascinating lives. John W. Mackay (the father of Clarence Mackay), best known of the four, built up the Postal Telegraph and Commercial Cable systems. His wife, Marie Hungerford, for years after her marriage saw little of America, but kept the society of Paris and London agog. James G. Fair was a master mechanic and one of the shrewdest of financiers?of all the Comstock?s conspicuous figures easily the least admired, a fact of which he was aware and which he regarded with complete indifference. He became a United State Senator and his elder daughter, Tessie, married Herman Oelrichs, then a thirty-seven-year-old bachelor and member of the prominent New York and Newport family. James Clair Flood?s great mansion atop Nob Hill in San Francisco is now the Pacific Union Club. William S. O?Brien, Flood?s partner, was the most shadowy of the quartet.It?s a rich field that Mr. Lewis has mined, and his story, which never lags, is set against the stunning background of the Virginia City of the seventies as well as the San Francisco of that era. The result is a really magnificent piece of authentic Americana.
Visa hela texten