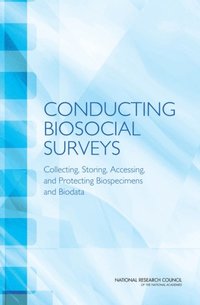 av National Research Council, Division Of Behavioral And Social Sciences And Education, Committee On Population, Committee On National Statistics, Accessing Panel On Collecting, Storing And Protecting Biological Specimens And Biodata In Social
E-bok (EPUB - DRM), Engelska, 2010-09-02
429
Ladda ned
Spara som favorit
Laddas ned direkt
Läs i vår app för iPhone, iPad och Android
Finns även som
Visa alla 2 format & utgåvor
Recent years have seen a growing tendency for social scientists to collect biological specimens such as blood, urine, and saliva as part of large-scale household surveys. By combining biological and social data, scientists are opening up new fields of inquiry and are able for the first time to address many new questions and connections. But including biospecimens in social surveys also adds a great deal of complexity and cost to the investigator's task. Along with the usual concerns about informed consent, privacy issues, and the best ways to collect, store, and share data, researchers now face a variety of issues that are much less familiar or that appear in a new light.In particular, collecting and storing human biological materials for use in social science research raises additional legal, ethical, and social issues, as well as practical issues related to the storage, retrieval, and sharing of data. For example, acquiring biological data and linking them to social science databases requires a more complex informed consent process, the development of a biorepository, the establishment of data sharing policies, and the creation of a process for deciding how the data are going to be shared and used for secondary analysis--all of which add cost to a survey and require additional time and attention from the investigators. These issues also are likely to be unfamiliar to social scientists who have not worked with biological specimens in the past. Adding to the attraction of collecting biospecimens but also to the complexity of sharing and protecting the data is the fact that this is an era of incredibly rapid gains in our understanding of complex biological and physiological phenomena. Thus the tradeoffs between the risks and opportunities of expanding access to research data are constantly changing.Conducting Biosocial Surveys offers findings and recommendations concerning the best approaches to the collection, storage, use, and sharing of biospecimens gathered in social science surveys and the digital representations of biological data derived therefrom. It is aimed at researchers interested in carrying out such surveys, their institutions, and their funding agencies.
Visa hela texten