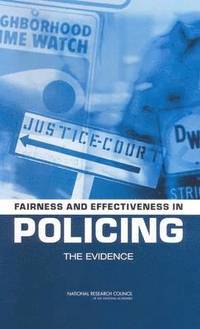 Fairness and Effectiveness in Policing

av National Research Council, Division Of Behavioral And Social Sciences And Education, Committee On Law And Justice, Kathleen Frydl, Kathleen Frydl
Häftad Engelska, 2004-04-01
479
Köp
Spara som favorit
Skickas inom 10-15 vardagar.
Fri frakt inom Sverige för privatpersoner.
Finns även som
Visa alla 2 format & utgåvor
Because police are the most visible face of government power for most citizens, they are expected to deal effectively with crime and disorder and to be impartial. Producing justice through the fair, and restrained use of their authority. The standards by which the public judges police success have become more exacting and challenging. Fairness and Effectiveness in Policing explores police work in the new century. It replaces myths with research findings and provides recommendations for updated policy and practices to guide it. The book provides answers to the most basic questions: What do police do? It reviews how police work is organized, explores the expanding responsibilities of police, examines the increasing diversity among police employees, and discusses the complex interactions between officers and citizens. It also addresses such topics as community policing, use of force, racial profiling, and evaluates the success of common police techniques, such as focusing on crime aEUROoehot spots.aEURO It goes on to look at the issue of legitimacyaEURO"how the public gets information about police work, and how police are viewed by different groups, and how police can gain community trust. Fairness and Effectiveness in Policing will be important to anyone concerned about police work: policy makers, administrators, educators, police supervisors and officers, journalists, and interested citizens.
Visa hela texten