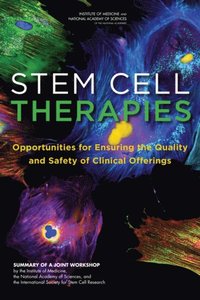 Opportunities for Ensuring the Quality and Safety of Clinical Offerings: Summary of a Joint Workshop by the Institute of Medicine, the National Academy of Sciences, and the International Society for Stem Cell Research

av National Research Council, Division On Earth And Life Studies, Board On Life Sciences, Institute Of Medicine, Board On Health Sciences Policy
E-bok (PDF - DRM), Engelska, 2014-06-18
45
Ladda ned
Spara som favorit
Laddas ned direkt
Läs i vår app för iPhone, iPad och Android
Stem cells offer tremendous promise for advancing health and medicine. Whether being used to replace damaged cells and organs or else by supporting the body's intrinsic repair mechanisms, stem cells hold the potential to treat such debilitating conditions as Parkinson's disease, diabetes, and spinal cord injury. Clinical trials of stem cell treatments are under way in countries around the world, but the evidence base to support the medical use of stem cells remains limited. Despite this paucity of clinical evidence, consumer demand for treatments using stem cells has risen, driven in part by a lack of available treatment options for debilitating diseases as well as direct-to-consumer advertising and public portrayals of stem cell-based treatments. Clinics that offer stem cell therapies for a wide range of diseases and conditions have been established throughout the world, both in newly industrialized countries such as China, India, and Mexico and in developed countries such as the United States and various European nations. Though these therapies are often promoted as being established and effective, they generally have not received stringent regulatory oversight and have not been tested with rigorous trials designed to determine their safety and likely benefits. In the absence of substantiated claims, the potential for harm to patients - as well as to the field of stem cell research in general - may outweigh the potential benefits.To explore these issues, the Institute of Medicine, the National Academy of Sciences, and the International Society for Stem Cell Research held a workshop in November 2013. Stem Cell Therapies summarizes the workshop. Researchers, clinicians, patients, policy makers, and others from North America, Europe, and Asia met to examine the global pattern of treatments and products being offered, the range of patient experiences, and options to maximize the well-being of patients, either by protecting them from treatments that are dangerous or ineffective or by steering them toward treatments that are effective. This report discusses the current environment in which patients are receiving unregulated stem cell offerings, focusing on the treatments being offered and their risks and benefits. The report considers the evidence base for clinical application of stem cell technologies and ways to assure the quality of stem cell offerings.
Visa hela texten