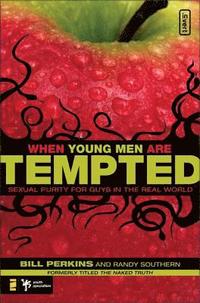 When Young Men Are Tempted

Sexual Purity for Guys in the Real World

av William Perkins, Randy Southern
Häftad Engelska, 2007-09-01
119
Köp
Spara som favorit
Finns även som
Visa alla 1 format & utgåvor
This practical look at sexual purity is written directly to teens in a frank, accessible, and totally honest style to help them make decisions for sexual integrity. When Young Men Are Tempted discusses factors surrounding sexual temptation and presents a strategy to encourage and assist young men to lead morally pure lives. Author Bill Perkins offers success stories as well as testimonies of false solutions. Readers will: * Understand why "wrong" things seem so "right" and how sexual appetites get out of control * Learn to filter and deal with the elements of teens' pop culture work * Find freedom to confront and defeat the demons of sexual compromise, bad habits, and feelings of guilt-breaking addictive cycles * User-friendly ways to make healthy decisions and act on them. * Discover strategies for ongoing victory Upside-down. Turned around. Sound like a typical day for you? invert books meet you where you are-in the twisted, flipped around places in your life. You've got so many relationships to focus on-God, others, and even yourself-invert books will help you figure out how to give yourself fully to all of them. invert tackles the difficult topics that are important to you-and will help you turn to focus on God more clearly.
Visa hela texten

Bill Perkins's wit, insight, and penetrating stories make him a sought-after speaker for corporate and Christian groups. He has conducted business and leadership seminars across the country for companies such as Alaska Airlines and McDonald's. Bill has appeared on nationally broadcast radio and television shows, including The O'Reilly Factor. He addresses men's groups around the world and has conducted chapels for major league baseball teams. Bill served as a senior pastor for 24 years and is the founder and CEO of Million Mighty Men. He is a graduate of the University of Texas and Dallas Theological Seminary. Bill has authored or collaborated on 20 books, including When Good Men are Tempted, When Young Men are Tempted, The Journey, Six Battles Every Man Must Win, 6 Rules Every Man Must Break, When Good Men Get Angry, and The Jesus Experiment(forthcoming in fall 2011). He and his wife, Cindy, live in West Linn, Oregon. They have three sons and two grandchildren. Randy Southern is a freelance writer with more than 50 books to his credit. A former product developer for Cook Communications and editor for Scripture Press, Randy lives with his wife, Ann, and their three children in Mount Prospect, Illinois.