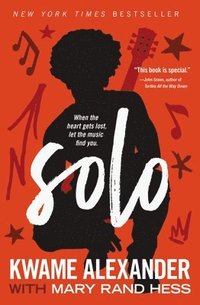 av Kwame Alexander, Mary Rand Hess
Häftad Engelska, 2019-07-23
119
Köp
Spara som favorit
Skickas inom 3-6 vardagar.
Fri frakt inom Sverige för privatpersoner.
Finns även som
Visa alla 2 format & utgåvor
New York Times bestseller! Blade never asked for a life of the rich and famous. In fact, he'd give anything not to be the son of Rutherford Morrison, a washed-up rock star and drug addict with delusions of a comeback. Or to no longer be part of a family known most for lost potential, failure, and tragedy, including the loss of his mother. The one true light is his girlfriend, Chapel, but her parents have forbidden their relationship, assuming Blade will become just like his father. In reality, the only thing Blade and Rutherford have in common is the music that lives inside them. And songwriting is all Blade has left after Rutherford, while drunk, crashes his high school graduation speech and effectively rips Chapel away forever. But when a long-held family secret comes to light, the music disappears. In its place is a letter, one that could bring Blade the freedom and love he's been searching for, or leave him feeling even more adrift. "A contemporary hero's journey, brilliantly told." -Kirkus Reviews, starred review "A rhythmic, impassioned ode to family, identity, and the history of rock and roll." -Booklist, starred review "Many readers will identify with Blade's struggle to find his place in a family where he feels like an outsider." -Publishers Weekly "The authentic character development and tone will strike a chord with young adults." -School Library Journal
Visa hela texten

'A gorgeously lyrical and passionate meditation on family and identity. Solo is Kwame Alexander at his finest.' * Nicola Yoon, New York Times bestselling author of Everything, Everything * 'A contemporary hero's journey, brilliantly told.' * Kirkus Reviews, starred review * 'A rhythmic, impassioned ode to family, identity, and the history of rock and roll.' * Booklist, starred review * 'From the lyric verse to the driving beat of the storytelling, this book is music, and beautiful music.' * Ellen Hopkins, New York Times bestselling author of The You I've Never Known * 'Hand to music lovers, reluctant readers, fans of spoken word poetry, those who appreciate Alexander's work, or anyone seeking a tale of self-discovery.' * School Library Journal * Betrayed by those closest to him and stunned by a family secret, 17-year-old Blade Morrison flees his comfortable but chaotic life as the son of a drug-addicted rock star. Seeking answers and closure, Blade travels to the Ghanaian village of Konko, where he gains new perspective on family and belonging. Writing in free verse, Alexander and Hess, who recently collaborated on Animal Ark, strongly communicate Blade's frustration and disappointment ("I have taken for granted/ the palm trees of Cali... planted by Spanish missionaries/ in the 18th century.... They don't belong here./ And neither do I"). Lyrics from Blade's songs (and interspersed references to songs from Lenny Kravitz, Metallica, and others) emphasize the importance of music in his life, both as a link to his family and as a way to express himself. Blade's interactions with his father, a Ghanaian young woman named Joy, and a child named Sia are especially poignant, so much so that these secondary characters can draw focus. But many readers will identify with Blade's struggle to find his place in a family where he feels like an outsider. -- PW * Publishers Weekly *

Kwame Alexander is the New York Times Bestselling author of 32 books, including The Undefeated; How to Read a Book; Solo; Swing; Rebound, which was shortlisted for prestigious Carnegie Medal; and his Newbery medal-winning middle grade novel, The Crossover. He's also the founding editor of Versify, an imprint that aims to Change the World One Word at a Time. Visit him at KwameAlexander.com Mary Rand Hess is a poet, mixed-media artist, screenwriter, and New York Times bestselling author of Solo and Animal Ark: Celebrating Our Wild World in Poetry and Pictures, both coauthored with Kwame Alexander.