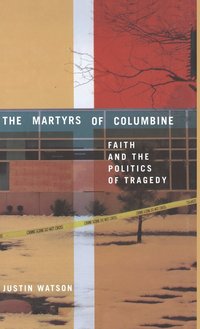 The Martyrs of Columbine

Faith and the Politics of Tragedy

av J Watson
Inbunden Engelska, 2003-05-01
873
Köp
Spara som favorit
Finns även som
Visa alla 2 format & utgåvor
On April 20, 1999, Eric Harris and Dylan Klebold killed twelve fellow students and one teacher at Columbine High School in Littleton, Colorado. Two of the victims of the Columbine massacre, Cassie Bernall and Rachel Scott, reportedly were asked by the gunmen if they believed in God. Both supposedly answered 'Yes' and were killed. Within days of their death, Cassie and Rachel were being hailed as modern-day martyrs and are seen by many American evangelicals as the sparks of a religious revival among teenagers. Cassie and Rachel, as innocents martyred for faith, also became useful symbols for those seeking to advance a conservative political agenda and to lay the blame for Columbine at the feet of their liberal opponents. According to police investigators, however, Cassie and Rachel may never have been asked by their killers about God. They may have been simply victims of a senseless crime rather than martyrs to a cause. The Martyrs of Columbine provides a careful examination of the available evidence and attempts to discover what really occurred. Despite these questions the martyr-stories continued to be told and the religious and political use of Cassie and Rachel continues. The popular significance of the martyrs of Columbine persists, and may even be growing. How and why is this happening? The Martyrs of Columbine is a groundbreaking investigation of what this tragedy has come and will come to mean in American religion, politics, and culture.
Visa hela texten

'...meticulous research...' - Union -Tribune, San Diego 'Author Justin Watson sifts through the cinders carefully [and] concludes that evangelicals over-reached...' - San Diego Union-Tribune 'The book is useful as an in-depth journalistic account of the tragedy and its aftermath.' - P. Kivisto, Choice '. . . meticulously documents this enduring use of martyrdom for political purposes...with a fair but skeptical eye'. - Salon.com '...the main focus of this excellent, brief study is on the way the contrasting interpretations of the killings have been offered by the political left and evangelical right in America.' - Paul Richardson, Church of England Newspaper ' . . . Watson has also told a riveting and quintessentially American tale of intrigue and mythmaking, tragedy and exploitation.' - Randall Balmer, Barnard College, Columbia University 'This is a fascinating exploration of the lives and posthumous careers of two of the teenagers killed at Columbine High School in 1999. After their deaths, Cassie Bernall and, to a lesser extent, Rachel Scott became at once role models for America's evangelical subculture and rhetorical weapons in the country's ongoing culture wars. By showing us who the girls were and how the story of their supposed martyrdom was created, disseminated, and interpreted, Justin Watson has provided invaluable insight into the ways American culture transforms local tragedies into political morality tales for the nation as a whole.' - Mark Silk, Director, The Leonard E. Greenberg Center for the Study of Religion in Public Life, Trinity College, Hartford

JUSTIN WATSON is the author of The Christian Coalition: Dreams of Restoration, Demands for Recognition. He is currently visiting assistant professor at Lafayette College.

Introduction: 'It Pierced the Soul of America' Martyrdom: The Blood of the Martyrs Is Seed Cassie Bernall: 'Feeding the World with One Word' Rachel Scott: 'Starting a Chain Reaction' The Politics of Martyrdom: 'I Will Heal Their Land' Defenders and Debunkers: 'What Really Happened?' Conclusion: 'When the Legend Becomes Fact, Print the Legend'