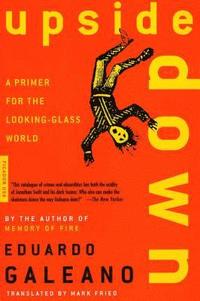 Upside down: a Primer for the Looking-Glass World

av Eduardo Galeano
Häftad Engelska, 2001-10-01
209
Köp
Spara som favorit
Skickas inom 5-8 vardagar.
Fri frakt inom Sverige för privatpersoner.
In a series of mock lesson plans and a "program of study" Galeano provides an eloquent, passionate, funny and shocking expose of First World privileges and assumptions. From a master class in "The Impunity of Power" to a seminar on "The Sacred Car"--with tips along the way on "How to Resist Useless Vices" and a declaration of the "The Right to Rave"--he surveys a world unevenly divided between abundance and deprivation, carnival and torture, power and helplessness.
We have accepted a "reality" we should reject, he writes, one where poverty kills, people are hungry, machines are more precious than humans, and children work from dark to dark. In the North, we are fed on a diet of artificial need and all made the same by things we own; the South is the galley slave enabling our greed.
Visa hela texten

"Galeano's pages are full of empathy, candor, unsettling connections, and fresh through more than 30 years, affront at the suffering of his country--for Uruguay itself was in exile from its long traditions of tolerance. He writes in defense of his countrymen and others: the embattled Mexican Indians in Chiapas, Brazil's street children, the more than eight million children abandoned across Latin America . . . from the Internet to Interpol, from the vapidity of television to auto-itis, nothing is safe from Galeano's committed deconstructions."--Isabel Fonseca," New York Times Book Review" <br>"Galeano takes us on a dark tour through the rabbit hole at the End of History. Like the revolutionary printmaker Posada, he unmasks the belle epoque of the bourgeoisie as a danse macabre of the masses. No one has focused greater moral clarity on the inhuman conditions and radical inequalities that sustain the mirage of the New Economy."--Mike Davis, author of" Ecology of Fear" <br>"This catalog of crimes and absurdities has both the acidity of Jonathan Swift and his dark humor. Who else can make the skeletons dance the way Galeano does?"--"The New Yorker " <br>"Galeano blends memoir with political analysis, tale-telling with cultural critique . . . He makes the world feel larger. Galeano puts the New Economy on trial, condemning those who accept a 'reality' that rejects the poor, and would allow globalization to reduce culture to entertainment, life to a spectacle, and news to advertising . . . the blend of fictional forms, autobiography, and radical social critique remains fresh for readers who yearn to find literary works with a political compass."--Lenora Todaro, " The Village Voice" <br>"He keeps the radical faith with dry wit, endless curiosity, and an unceasing appetite for absurdity. "Upside Down," rife with subversive aphorisms and revealing statistics--to catch 100 criminals a year, Mexico City requires 1,295 police officers, while London makes do with 18--

Eduardo Galeano, one of Latin America's most distinguished writers, journalists, and historians, is the author of the "Memory of Fire" trilogy (winner of the 1989 American Book Award), "Open Veins of Latin America," and many other works. He lives in Montevideo, Uruguay.