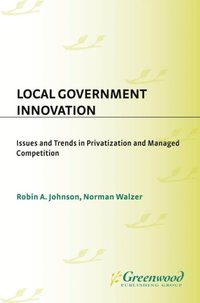 av Robin A Johnson, Norman Walzer
E-bok (PDF - DRM), Engelska, 2000-09-30
839
Ladda ned
Spara som favorit
Laddas ned direkt
Läs i vår app för iPhone, iPad och Android
Nationally recognized scholars and practitioners examine opportunities in which services traditionally provided by local governments are offered by the private sector though a contract or are transferred to a private business completely. Many large U.S. cities have contracted services for many years. With the movement to rightsize governments in recent years there has been renewed interest by local governments in similar ventures. Privatization, in its many forms, is now seen as a viable alternative to traditional ways of providing public services and can bring substantial benefits to residents. With greater accountability being demanded and pressures on local officials to hold the line on or reduce taxes, efforts to find innovative service delivery methods will probably increase. Cities, such as Atlanta, Indianapolis, and Charlotte, are examples showing that contracts with private businesses can work to benefit all parties. Local officials must move ahead cautiously, and not all attempts at privatization or contracting have succeeded. Some cities, after an evaluation, have decided to provide services with municipal employees.The main issues underlying privatization decisions will be addressed conceptually so that practitioners and academics benefit from a review of the current thinking on the issues. At the same time, exemplary practices and case studies are included so that readers can understand how privatization and managed competition have been implemented in local governments. Special attention is paid to administrative questions that may arise during the implementation process. For example, ways in which cities have worked with employees who fear displacement because of the privatization process are described. The book breaks new ground by including references to recent innovations in public-private partnerships and describing how privatization may evolve in the future.
Visa hela texten