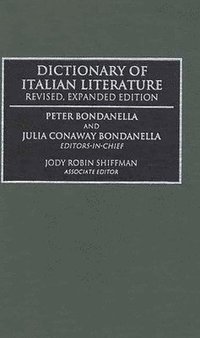 av Peter E Bondanella, Jody Robin Shiffman, Julia Conaway Bondanella
Inbunden Engelska, 1996-05-01
2219
Köp
Spara som favorit
Skickas inom 10-15 vardagar.
Fri frakt inom Sverige för privatpersoner.
This revised and expanded edition of the only English-language dictionary of Italian literature provides some 400 alphabetically arranged entries on Italian writers, periods, literary movements, and versification, and on critical problems related to literary history. The volume covers Italian literature from the Middle Ages to the present and includes a number of new entries for contemporary writers. The entries, written by expert contributors, include current bibliographical information and have often been updated to reflect new scholarship. Unlike most Italian dictionaries, this book is aimed specifically at the English-language market and provides copious information on English translations as well as a guide to Italian literature in comparative contexts. Entries are arranged alphabetically and include extensive cross-references. Each entry provides a basic identification of the term, followed by a more extensive discussion of the term's background and significance. A bibliography concludes each entry, and citations reflect the most current general works on the topic. Unlike most Italian dictionaries, this volume is aimed specifically at the user whose primary language is English. All Italian titles have been translated, and the entries provide copious information on English translations of Italian works. Appendices trace the chronological development of Italian literature and place it within the larger context of world literature, history, and culture.
Visa hela texten

"[L]ike its predecessor, this edition provides clear, concise bibliographies that attempt to place major and minor Italian authors within a broad cultural context. . . . Each entry concludes with a brief bibliography of primary works, including English translations, and selected works of criticism; particular attention has been given to updating these bibliographies. Most entries are written by the editors; others are written and signed by experts whose credentials are fully described. . . . Recommended for all academic and larger public libraries." - Choice

Peter Bondanella is chairman of the Department of West European Studies at Indiana University and Distinguished Professor of comparative literature, film studies, Italian, and West European studies. He is the author, editor, or translator of numerous books, including Machiavelli and the Art of Renaissance History (1974), The Portable Machiavelli (1979), The Eternal City: Roman Images in the Modern World, The Cinema of Federico Fellini (1992), and The Films of Roberto Rossellini (1993). He is a past president of the American Association for Italian Studies and a recipient of fellowships from the National Endowment for the Humanities, the Lilly Foundation, and the American Council for Learned Societies. Julia Conway Bondanella is associate professor of French and Italian and associate director of the Honors Division at Indiana University. By training a comparatist with interests in medieval and Renaissance literature and the history of ideas, she is the author of Petrarch's Visions and Their Renaissance Analogues (1978), editor of The Italian Renaissance Reader (1987) and cotranslator and coeditor of Giorgio Vasari's Lives of the Most Famous Artists (1992). She is a past president of the National Collegiate Honors Council and past executive secretary of the American Association for Italian Studies. Jody Robin Shiffman is completing her PhD at Indiana University in Italian and has written a number of articles on Italian literature. She is coeditor of Carlo Ridolfi's Life of Titian (1995) and is presently working on a critical edition and modern English translation of Ghiberti's writings on art.

Preface to the Second Revised Edition Preface to the First Edition How to Use This Dictionary Entries in Alphabetical Order Appendix A: Time Line Appendix B: Entries Grouped by Subject Matter or Period Reference Aids: A Selected List Index