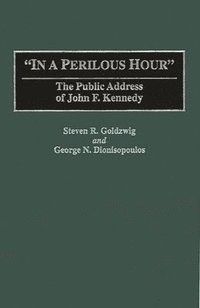 In a Perilous Hour

av Steven R Goldzwig, George N Dionisopoulos
Inbunden Engelska, 1995-07-01
799
Köp
Spara som favorit
Skickas inom 10-15 vardagar.
Fri frakt inom Sverige för privatpersoner.
This first book-length critical analysis of Kennedy's public address defines how he aroused Americans to rise to the opportunities and challenges that he defined for them. This rigorously researched study offers an in-depth analysis of the development of President Kennedy as a public speaker and a balanced view of his civil rights, foreign policy, presidential, and other types of speeches. Eight speech texts accompany the analysis. This reference and teaching tool also offers a selected chronology of major speeches along with a bibliography of important primary and secondary sources. Designed for students, teachers, and professionals in the fields of rhetoric, political communication, presidential studies, and American history.
Visa hela texten

"Professors Goldzwig and Dionisopoulos provide here one of the strongest contributions yet to the Great American Orators Series. While previous research in the vast literature on Kennedy consistently mentions JFK's oratorical greatness, they note, no extant scholarship either delineates the dimensions of his rhetorical skill or explicates the link between public discourse and policy making during his presidency. The authors promise such an enterprise, and they deliver on that promise. This is an excellent book in support of an original thesis. The authors' case is compellingly argued, persuasively documented, and clearly written."-Professor David Henry California Polytechnic State University "An excellent introduction and overview of the rhetoric of Kennedy. The authors concentrate on major rhetorical events in the administration...and render reasoned judgements based on intensive research."- Theodore O. Windt Professor of Communication University of Pittsburgh "This important study should be required reading for all students of Cold War rhetoric, presidential discourse, and the Kennedy administration. Drawing on primary sources, the authors paint a chilling picture of the uses and abuses of rhetoric at the highest levels of government. More than a paean to eloquence, this book is a meditation on our long national self-imprisonment within the prison-house of language, imagery, and cultural memory."- Martin J. Medhurst Texas A&M University

Bloggat om In a Perilous Hour