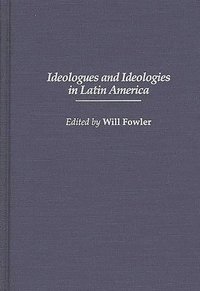 Ideologues and Ideologies in Latin America

av William M Fowler
Inbunden Engelska, 1997-03-01
1009
Köp
Spara som favorit
Skickas inom 10-15 vardagar.
Fri frakt inom Sverige för privatpersoner.
The chapters in this volume provide a varied yet consistent analysis of the ways in which ideologies have been used, misused, or abandoned in Latin America in the twentieth century. The volume offers scholars and students a challenging collection of interpretations of and explanations for the ways in which ideologues and ideologies have played a crucial role in the political development of the continent. And, while illuminating key reasons for the rise and fall of specific ideologies and their repeated betrayal throughout the century-from anarchism to communism, to socialism, to Peronism, to neoliberalism-the volume indicates how much there is still left to learn about the importance of ideological discourse in the mind and polity of Latin America. With chapters examining Mexico, Chile, Cuba, Paraguay, and Argentina, this work will be of interest to all Latin Americanists.
Visa hela texten

WILL FOWLER is Lecturer in Spanish at St. Salvator's College of the University of St. Andrews in Scotland. He is the editor of Authoritarianism in Latin America since Independence (Greenwood, 1996).

Preface Introduction: Stressing the Importance of Ideological Discourse by Will Fowler The Rise and Fall of Anarcho-Syndicalism in Latin America, 1880-1930 by Paul Henderson Cuban Nationalism and Responses to Private Education in Cuba, 1902-1958 by Laurie Johnston Intellectuals and the State in Spanish America: A Comparative Perspective by Nicola Miller Ideology and Populism in Latin America: A Gendered Overview by Marta Zabaleta, translated by Caroline Fowler and Mike Gatehouse Ideology and the Cuban Revolution: Myth, Icon, and Identity by Antoni Kapcia U.S. Ideology and Central American Revolutions in the Cold War by David Ryan Ideology and Opportunism in the Regime of Alfredo Stroessner, 1954-1989 by Peter Lambert Feminism, Ideology, and Low-Income Women's Groups in Latin America by Anny Brooksbank Jones Jaime GuzMAn and the Gremialistas: From Catholic Corporatist Movement to Free Market Party by Marcelo Pollack El Mercurio's Editorial Page ("La Semana Economica") and Neo-Liberal Policy Making in Today's Chile by David E. Hojman Selected Bibliography Index