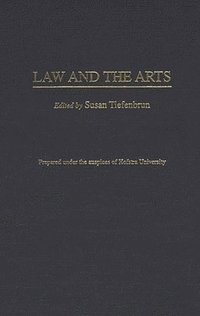 Law and the Arts

av Susan Tiefenbrun
Inbunden Engelska, 1999-02-01
999
Köp
Spara som favorit
Skickas inom 10-15 vardagar.
Fri frakt inom Sverige för privatpersoner.
Beställ senast idag kl 17:30 för leverans innan jul!
This interdisciplinary study examines the relationships between law and the humanities. The goal of the essays is to promote exchanges of ideas in such diverse, but related fields as law, literature, film, theater, communication, art, and architecture and to inspire readers to think about the laws hidden in the interstices of the arts as well as the artistry of the law. On the one side, chapters focus attention on legal restraints in the media, censorship of the arts, copyright protection issues on the Internet, and artists' rights in the past and in the present cyberspace era. On the other, the role played by law in literature and theater is examined, and one essay explores the architectural design of the U.S. Supreme Court and how its architects fit into political history. A collection valuable to scholars, researchers, and lay readers alike with interests in the relationships between law and the humanities.
Visa hela texten

SUSAN TIEFENBRUN is the Director of International Law Programs, the Administrative Director of the Center for Communication Law and Technology, and an Adjunct Professor of Law at the Hofstra University School of Law. She taught French literature at Columbia University and Sarah Lawrence College for more than twenty years before becoming a lawyer, and she has written extensively in the field of law and literature.

Foreword by Stuart Rabinowitz Preface by Susan Tiefenbrun Law, the Arts, and Censorship Legal Restraints at the TV Channeling Controversy by Sondra M. Rubenstein Censorship in the Arts in the U.S. Today by Leanne Katz Art and Repression in the McCarthy Era by Howard Fast The Old Problem of New Communications Technologies: Can We Do Better This Time? by Eric M. Freedman Law and Cyberspace Museums without Walls: Promissory Rights and Reproduction in the World of Cyberspace by Susan J. Drucker and Gary Gumpert Copyright and Cyberspace: Functioning in a Digitally Networked Environment by Donald Fishman Law and Literature Vichy Law and the Holocaust in France: PREcis of a Talk to the Hofstra Conference by Richard H. Weisberg A Comment on Richard H. Weisberg's Work on the Vichy Lawyers by Robin West Legal Fiction and Literary Fiction in Seventeenth- and Eighteenth-Century France by Christian Biet Law, Literary Theory, and Critical Legal Theory: A Forum by Mitchel Lasser, et al. Law and Shakespeare Introduction to Interdisciplinarity and the Retrial of Shylock by Susan Tiefenbrun The Trial of Shylock from The Merchant of Venice by William Shakespeare by Peter M. Sander Appellant's Brief by Daniel J. Kornstein Appellee's Brief by Floyd Abrams Appellant's Reply Brief by Daniel J. Kornstein Shylock v. Antonio on Appeal: The Deliberations by Daniel J. Kornstein Thoughts of a Literary Judge by Howard Kissel Shylock on Appeal by Peter J. Alscher Law and Art Cass Gilberts's U.S. Supreme Court and the Comprehensive Planning Ideal by Barbara S. Christen Index