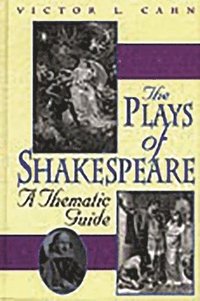 The Plays of Shakespeare

av Victor L Cahn
Inbunden Engelska, 2000-10-01
859
Köp
Spara som favorit
Touching viewers and readers with his presentation of social, moral, and political issues, Shakespeare holds ageless and unequaled appeal primarily because of the universal themes at the heart of his dramatic works. Shakespeare scholar Victor Cahn takes a unique approach to exploring the plays by identifying and explicating the themes that recur throughout the canon. Written in lively language, each of the 35 essays explores a core theme or topic and discusses its implications in several key plays in which it figures prominently. This user-friendly guide not only allows readers to better understand the significance of concepts such as power, politics, marriage or money; the organization by theme also helps users to compare and contrast these important topics across relevant plays. Cahn draws vivid connections between related works of Shakespeare, but just as importantly, enlightens readers as to the pertinence of these themes in contemporary life. While this thematic guide examines all of Shakespeare's plays, particular attention is devoted to those works most often read by students; the tragedies such as Romeo and Juliet, Julius Caesar, Hamlet, and Macbeth, the comedies including A Midsummer Night's Dream and Merchant of Venice, as well as the historical plays like Richard II, and the romantic works such as The Tempest. Students who wish to investigate a particular play in greater depth can refer to this book's title index to identify all citations of that work. This valuable literary resource serves myriad uses, enabling students to trace the thread of a theme, to compare its treatment in several plays, and to understand better a play, its characters, plot and language, by examining Shakespeare's central themes.
Visa hela texten

VICTOR L. CAHN is Professor of English at Skidmore College, where he teaches courses in the history of drama, Shakespeare, and modern drama. Dr. Cahn's book Shakespeare the Playwright: A Companion to the Complete Tragedies, Histories, Comedies, and Romances (Greenwood 1991 & 1996) was selected as an Outstanding Academic Book by Choice. He has also written studies of contemporary British dramatists Tom Stoppard and Harold Pinter, and his numerous articles and reviews have appeared in such diverse publications as Modern Drama, The Literary Review, The New York Times, and Variety. An actor by avocation, Dr. Cahn is the author of several produced plays.