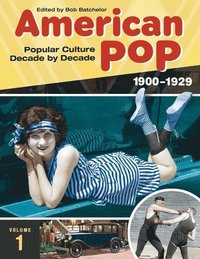 av Bob Batchelor
Inbunden Engelska, 2008-12-30
3319
Köp
Spara som favorit
Pop culture is the heart and soul of America, a unifying bridge across time bringing together generations of diverse backgrounds. Whether looking at the bright lights of the Jazz Age in the 1920s, the sexual and the rock-n-roll revolution of the 1960s, or the thriving social networking websites of today, each period in America's cultural history develops its own unique take on the qualities define our lives.American Pop: Popular Culture Decade by Decade is the most comprehensive reference on American popular culture by decade ever assembled, beginning with the 1900s up through today. The four-volume set examines the fascinating trends across decades and eras by shedding light on the experiences of Americans young and old, rich and poor, along with the influences of arts, entertainment, sports, and other cultural forces. Whether a pop culture aficionado or a student new to the topic, American Pop provides readers with an engaging look at American culture broken down into discrete segments, as well as analysis that gives insight into societal movements, trends, fads, and events that propelled the era and the nation. In-depth chapters trace the evolution of pop culture in 11 key categories: Key Events in American Life, Advertising, Architecture, Books, Newspapers, Magazines, and Comics, Entertainment, Fashion, Food, Music, Sports and Leisure Activities, Travel, and Visual Arts. Coverage includes: How Others See Us, Controversies and scandals, Social and cultural movements, Trends and fads, Key icons, and Classroom resources. Designed to meet the high demand for resources that help students study American history and culture by the decade, this one-stop reference provides readers with a broad and interdisciplinary overview of the numerous aspects of popular culture in our country. Thoughtful examination of our rich and often tumultuous popular history, illustrated with hundreds of historical and contemporary photos, makes this the ideal source to turn to for ready reference or research.
Visa hela texten

"This set makes for fun browsing. . . this set will be useful for school libraries and teachers and to help undergraduates get started with their research. . . . Recommended." - Choice "Bottom line: Depending on when you were born, this set could be a glimpse into history or a reminder of the not-so-distant past. It provides insight into people and events that shaped our cultural heritage. Users should find the set similar to Gale's 'American Decades' and 'American Eras' series. While academic libraries would probably use the books more, public libraries may also find them valuable." - Library Journal "This is a well-produced reference that provides students and the general reader with an overview of daily life and culture in the US. Volume Four contains a lengthy appendix of lessons, activities, research paper topics and guidelines, and other classroom resources." - Reference & Research Book News "Editor Batchelor, a professor and author of several other pop-culture-related titles, presents an engaging look at daily life in twentieth- and twenty-first-century America in a work based partly on the more scholarly American Popular Culture through History (2002). . . . Those looking for a reference work for the general public and high schools will find this a nice choice. . ." - Booklist ". . . a winning pick. . . Any general interest or American history collection will find this a fine, accessible reference, pairing black and white photos with timelines of popular culture events. From fashion and sports to travel and advertising, American Pop is an outstanding reference set for any popular culture library." - Midwest Book Review

Bob Batchelor, PhD, is assistant professor in the School of Journalism and Mass Communication at Kent State University and academic coordinator of its online master's program in public relations. Batchelor is the author or editor of 21 books, including 3 volumes in Greenwood's "Popular Culture through History" series: The 1900s, The 1980s, and The 2000s. In addition, he edited Praeger's three-volume Cult Pop Culture: How the Fringe Became Mainstream and Praeger's three-volume American History through American Sports.