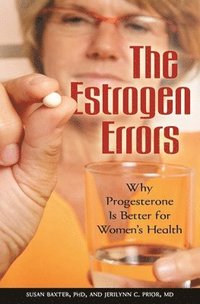 Why Progesterone Is Better for Women's Health

av Susan Baxter, Susan Baxter, Jerilynn C Prior, Jerilynn C Prior
Inbunden Engelska, 2009-05-19
649
Köp
Spara som favorit
Skickas inom 10-15 vardagar.
Fri frakt inom Sverige för privatpersoner.
Beställ boken senast måndag 30 november för leverans innan julafton
In a book of importance to all women, expert authors provide an authoritative rebuttal to the widely held belief that estrogen therapy is the best treatment for perimenopausal women. In this revealing work, a medical writer and an internationally known physician team up to explain the controversy over prescribing estrogen for perimenopausal women in the United States and to detail why progesterone is actually a far more effective, and far less risk-ridden, approach. Citing longstanding and emerging research, patient vignettes, and personal experience, endocrinologist Jerilynn Prior and writer Susan Baxter explain how false beliefs about estrogen became entrenched in U.S. medicine and culture-and how and why business and politics have played a role in this erroneous thinking. Like most women in Europe now, Prior's patients find progesterone the key to dealing with a lifecycle transition that, contrary to Western medicine, these authors do not see as a disease. Challenging medical orthodoxy, The Estrogen Errors: Why Progesterone Is Better for Women's Health presents arguments and evidence that women and their doctors, male and female, will find compelling and useful.
Visa hela texten

"The Estrogen Errors is an informative text written for providers and women that questions the hypothesis that estrogen is the deficient hormone during the perimenopause, and that this deficiency is responsible for the varied symptoms experienced by many woman during this transitional phase. Dr. Prior is an endocrinologist who clearly has studied and researched the topic thoroughly. " - Medpedia.com "The book is well written, clearly laid out, and understandable to an educated reader. It points out what we now know are inconsistencies and outright errors in the previously widely accepted prescription of estrogen to normal women during their transition to menopause....I think the book offers a significant amount of information for both physicians "treating" and women approaching menopause, from both an estrogen and progesterone perspective. I'm really glad I read it....I appreciated the clarification of terminology, the effort to demedicalize a natural process, and the confidence to look outside the box at commonly accepted doctrine surrounding what has been happening to women since the beginning of human life." - British Columbia Medical Journal "In this engaging book, Baxter (Simon Fraser Univ.) and Prior (Univ. of British Columbia) combine detailed explanations of women's reproductive endocrinology and physiology with deconstructions of social, medical, and cultural narratives about women's hormones. The result is an insightful survey of current and historical dogma, scientific research, and medical practices in women's health. . . . Recommended. Lower-level undergraduates and above; general readers." - Choice "The Women's Health Initiative study in the 1990s upended the conventional wisdom concerning hormone replacement therapy for menopausal women. Medical writer Baxter (Simon Fraser U.) and Prior (medicine, U. of British Columbia) trace the history of the estrogen-deficiency disease paradigm of menopause. Instead of the myth that estrogen is a female hormone that needs replenishing, these self-identified feminists advocate consideration of the complexities of what is 'normal' and the use of progesterone among options to ease menopausal symptoms. Appendices include further information about perimenopause, 'the forgotten transition,' and menopause management." - SciTech Book News

Susan Baxter is a medical writer and social scientist with more than 20 years experience writing on controversial medical topics. She teaches part-time at Simon Fraser University. Her articles have appeared in publications including Family Practice, Medical Post, HealthWatch, Lifeline, and Easy Living. Jerilynn C. Prior, MD is Professor of Medicine, Division of Endocrinology, at the University of British Columbia. She is Founder and Scientific Director of the Centre for Menstrual Cycle and Ovulation Research, and has authored research published in journals including The New England Journal of Medicine and the Journal of the American Medical Association. Prior is a Diplomate of the American Board of Internal Medicine, and a Fellow of the Royal College of Physicians and Surgeons, of Canada. As a clinician and researcher, she has treated thousands of women. Prior has been Visiting Lecturer across Canada and the United States at schools including the New York Academy of Sciences, Harvard School of Public Health, and Albert Einstein Medical School. In 1985, Prior won a Nobel Peace Prize for her work with Physicians for the Prevention of Nuclear War.