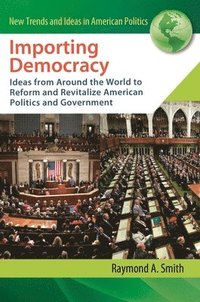 av Raymond A Smith
Inbunden Engelska, 2010-06-02
449
Köp
Spara som favorit
Skickas inom 5-8 vardagar.
Fri frakt inom Sverige för privatpersoner.
This unique work brings together a comparative analysis of American institutions, a tour of the world's political systems, and a manifesto for reform, offering insights on democracy that could revitalize U.S. politics and government. The United States has always taken pride in being a model of democracy. However, presidential systems are more closely associated with dictatorship and single-party rule in other parts of the world like Latin America and Africa. Indeed, democratic practices more often flourish in parliamentary systems, and the United States remains the only advanced, industrialized democracy with a presidential system instead of a parliamentary organization. Each of the 21 chapters in Importing Democracy: Ideas from Around the World to Reform and Revitalize American Politics and Government highlights a feature of a foreign nation's political system that is absent in the U.S. system. Chapters also draw on brief case studies from countries as diverse as Australia, Brazil, Iceland, India, Germany and South Africa. Importing Democracy explores whether American politics and government might be enhanced by incorporating a multiparty system, a simplified Constitutional amendment process, parliamentary practices of accountability, proportional representation elections, presidential votes of "no confidence," restraints on judicial power, and much more. * A comprehensive glossary defines key terms used throughout the text * Conclusion charts provide a rank ordering of the proposed reform and a suggested "blueprint" for change to U.S. politics and government
Visa hela texten

"This fascinating book advocates much-needed political reform in the United States, and Smith (adjunct, Columbia Univ.) brings fresh perspectives, in-depth analysis, and provocative thinking on transforming U.S. democracy to a more representative and effective government. ... Recommended." - Choice "While there is no shortage of American politicians, media figures, and others ready to offer their thoughts on "exporting democracy," it is rare to find Americans willing to examine the lessons of democratic practices from outside the proverbial "shining city on the hill" and consider 'importing democracy.' This volume by Smith (political science, Columbia U.) is the exception to the rule, discussing major changes modeled on other countries' democratic experiences that offer the potential to expand popular participation in governance, better balance the promotion of majority rule with the protection of minority rights, improve the effectiveness of government while maintaining democratic limits to government power, and/or advance individual liberty and social equality. The focus of the case studies is on political institutions and processes, rather than policy. Examples of the 21 cases discussed include the Italian experience with proportional representation, Chile's experience with runoff elections for executive offices, Brazil's introduction of compulsory voting, Switzerland's system of national referenda, Turkey's limitation of the executive's legislative and judicial powers, New Zealand's acceptance of legislative overrides of judicial opinions, and South Africa's constitutional social and economic protections." - Reference & Research Book News