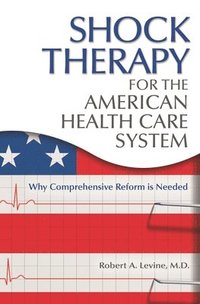 Why Comprehensive Reform Is Needed

av Robert Arthur Levine
Inbunden Engelska, 2009-07-23
569
Köp
Spara som favorit
Skickas inom 5-8 vardagar.
Fri frakt inom Sverige för privatpersoner.
Shock Therapy For the American Health Care System describes the problems of the health care system and offers a program of comprehensive reform that is more far-reaching than anything currently being proposed. From a veteran physician comes this remarkably clear-eyed look at what's wrong with how we adminster and pay for health care and what can be done to fix it. In Shock Therapy for the American Health Care System: Why Comprehensive Reform Is Needed, Dr. Robert Levine offers an easily understandable diagnosis of the problems plaguing our current health care infrastructure, with discussions that include the roles of various stakeholders-insurance companies, "big pharma," hospitals, health care providers, and patients. He also dispels a number of myths designed to make voters leery of any reform efforts. Levine's comprehensive plan addresses everything from bloated bureaucracies to unnecessary procedures to the handling of negligence and malpractice lawsuits/claims. Throughout, Levine backs his proposals with facts and comparisons to systems in various countries, and concludes that even now, with disaster looming, the ultimate goal of providing health insurance for every American is achievable and affordable. * Provides bibliographies for each of the nine chapters * Six tables and graphs provide an easy way to understand essential data
Visa hela texten

"Robert Levine's book is a timely addition to the ongoing debate, and, even though not everyone will agree with his proposed fix, he systematically covers the issues at hand and offers possible solutions. . . . Although the book is not a fast read-each chapter is dense with thought-provoking facts and well-articulated ideas-I would recommend this book to anyone interested in learning more about the issues that plague the U.S. health care system." - Journal of the American Medical Association ". . .[Levin's] cogent analysis, rooted in historical, medical, systemic, and political realities, places it above other books in the genre. Recommended. Lower-level undergraduates and above; general readers." - Choice "A veteran physician offers an insider's perspective on problems in the present system for administering and paying for health care. His program of reform is more far-reaching than anything currently being proposed, and, he maintains, would provide universal coverage at no additional cost. Writing in accessible language for general readers, Levine, former chief of neurology at Norwalk Hospital and retired professor of medicine at Yale University, dispels common myths about health care reform, and reveals the roles of the various stakeholders in our current health care infrastructure: insurance companies, big pharma, hospitals, the medical device industry, health care providers, and patients. He identifies areas in the current system where huge savings could be realized, and backs up his proposals with facts and comparisons to systems in other countries. Tables and graphs provide summaries of data." - SciTech Book News

Dr. Robert Levine is a neurologist in private practice in Norwalk, CT, former chief of neurology at Norwalk Hospital, and associate clinical professor of medicine at Yale University (ret).