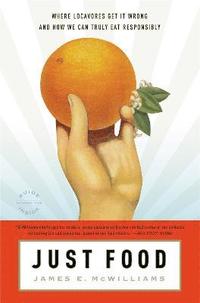 av James McWilliams
Häftad Engelska, 2010-06-10
209
Köp
Spara som favorit
Skickas inom 3-6 vardagar.
Fri frakt inom Sverige för privatpersoner.
We suffer today from food anxiety, bombarded as we are with confusing messages about how to eat an ethical diet. Should we eat locally? Is organic really better for the environment? Can genetically modified foods be good for you? JUST FOOD does for fresh food what Fast Food Nation did for fast food, challenging conventional views, and cutting through layers of myth and misinformation. Informative and surprising, JUST FOOD tells us how to decide what to eat, and how our choices can help save the planet and feed the world.
Visa hela texten

"McWilliams's examination of the culinary history of Colonial America is more than a....gastronomic tour....A lively and informative read."--The New Yorker "McWilliams has penned an illuminating account of the evolution of foodways in the colonial Americas."--Josh Friedland, Washington Post Book World "The lucid style and jaunty tone....make this accessible to all."--Publishers Weekly PRAISE FOR A REVOLUTION IN EATING: "Fascinating....Anyone curious about the cultural history of that meatloaf on the dinner plate will gobble it up."--Tina Jordan, Entertainment Weekly "Enlightening....James E. McWilliams is stirring up trouble, the kind that gets noticed-and the kind that makes us all scratch our heads and think harder....Just Food ultimately offers a brave, solid argument that anyone who cares about their food-and everyone should care about their food-should consider."--Meridith Ford Goldman, Atlanta Journal-Constitution "McWilliams presents some appealing alternatives to the views of both the agrarian romantics on the left and the agribusiness capitalists on the right. The author advocates a judicious use of genetically engineered seeds and food products, believes we must reduce our passion for land-animal protein...and urges more attention to the nascent science of aquaponics...He concludes that the best food-production model may be "a broad pattern of regionally integrated, technologically advanced, middle-sized farms." Rich in research, provocative in conception and nettlesome to both the right and the left."--Kirkus Reviews "McWilliams has guts. Some of the changes he champions will draw fire from all quarters...but he also presents ideas that may appeal to both the greenerati and capitalistas...McWilliams forgoes sloganeering in favor of measured logic, but he doesn't downplay the notion that a worldwide food crisis is imminent and that we had better fix things. Soon."--Mike Shea, Texas Monthly

James McWilliams is currently a fellow at Yale University's Agrarian Studies Program, and an associate professor of history at Texas State University. He is the author of two previous books. His articles and reviews have appeared in the New York Times, Washington Post, Los Angeles Times, and the Christian Science Monitor