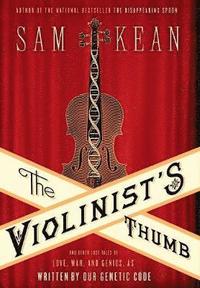 And Other Lost Tales of Love, War, and Genius, as Written by Our Genetic Code

av Sam Kean
(1 röst)  |  Läs 1 recension
Inbunden Engelska, 2012-07-01
385
Köp
Spara som favorit
From New York Times bestselling author Sam Kean comes incredible stories of science, history, language, and music, as told by our own DNA. In The Disappearing Spoon, bestselling author Sam Kean unlocked the mysteries of the periodic table. In The Violinist's Thumb, he explores the wonders of the magical building block of life: DNA. There are genes to explain crazy cat ladies, why other people have no fingerprints, and why some people survive nuclear bombs. Genes illuminate everything from JFK's bronze skin (it wasn't a tan) to Einstein's genius. They prove that Neanderthals and humans bred thousands of years more recently than any of us would feel comfortable thinking. They can even allow some people, because of the exceptional flexibility of their thumbs and fingers, to become truly singular violinists. Kean's vibrant storytelling once again makes science entertaining, explaining human history and whimsy while showing how DNA will influence our species' future.
Visa hela texten

"The DNA molecule, Kean asserts, is the 'grand narrative of human existence'-and he boldly sets out to tell the tale, not only explaining genetics and its scientific history but linking Mendel's pea shoots to the evolution of early humans....He's crafted a lively read packed with unforgettable details." -- Sarah Zhang, Discover--- "The wonderful thing about Kean...is his ability to focus on a spiraling narrative while he climbs up the double-helix ladder in this history of genetics, remaining more of less at the center of the rungs while he goes from the struggles of Mendel and Miescher to the Human Genome Project....It is a handsome story." -- Jimmy So, Daily Beast--- "Science is made fun whenever best-selling author Kean...is narrating." -- Susannah Cahalan, New York Post--- "Kean's real knack is for digging up strange details most textbooks leave out....More than an assortment of trivia, the book is an engaging history." -- Allison Bohac, Science News--- "Kean's accessible genetic overview, written for the layman, is often as simple and elegant as a double helix." -- Keith Staskiewicz, Entertainment Weekly--- "Kean turns his clever eye and engaging prose to unveiling the secrets of our DNA." -- Denver Post--- "Kean offers up strange stories of how our genes help and hinder us." -- Newsweek, "Brainy Beach Reads"--- "Kean is one of America's smartest and most charming science writers, and his new book could be perfect for summer readers who prefer some substance with their fun." -- Michael Schaub, National Public Radio--- "As he did in his debut bestseller, The Disappearing Spoon, Sam Kean educates readers about a facet of science with wonderfully witty prose and enthralling anecdotes....Kean's thoughtful, humorous book is a joy to read." -- Publishers Weekly (Starred Review)--- "A science journalist with a flair for words...[Kean's] language is fluid and accessible, even for the science-challenged." -- Barbara Hoffert, Library Journal--- Named one of Entertainment Weekly's Best Books of 2012---

Sam Kean is the New York Times bestselling author of Caesar's Last Breath, The Tale of the Dueling Neurosurgeons, The Disappearing Spoon, and The Violinist's Thumb, all of which were also named Amazon top science books of the year. The Disappearing Spoon was a runner-up for the Royal Society of London's book of the year for 2010, and The Violinist's Thumb and The Tale of the Dueling Neurosurgeons were nominated for the PEN/E.O. Wilson Literary Science Writing Award in 2013 and 2015, as well as the AAAS/Subaru SB&F prize. His work has appeared in the Best American Nature and Science Writing, the New Yorker, the Atlantic, the New York Times Magazine, Psychology Today, Slate, Mental Floss, and other publications, and he has been featured on NPR's "Radiolab," "All Things Considered," and "Fresh Air."