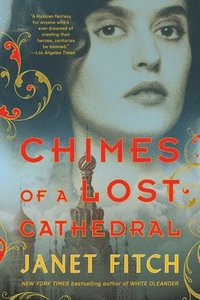 Chimes of a Lost Cathedral

av Janet Fitch
Häftad Engelska, 2020-09-10
159
Köp
Spara som favorit
Skickas inom 7-10 vardagar.
Gratis frakt inom Sverige över 159 kr för privatpersoner.
Finns även som
Visa alla 2 format & utgåvor
After the loves and betrayals of The Revolution of Marina M., young poet Marina Makarova finds herself alone amid the devastation of the Russian Civil War--pregnant and adrift, forced to rely on her own resourcefulness to find a place to wait out the birth of her child and eventually make her way back to her native city, Petrograd. After two years of revolution, the city that was once St. Petersburg is almost unrecognizable, the haunted, half-emptied, starving Capital of Once Had Been, its streets teeming with homeless children. Moved by their plight, though hardly better off herself, she takes on the challenge of caring for these orphans, until they become the tool of tragedy from an unexpected direction. Shaped by her country's ordeals and her own trials--betrayal and privation and inconceivable loss--Marina evolves as a poet and a woman of sensibility and substance hardly imaginable at the beginning of her transformative odyssey. Chimes of a Lost Cathedral is the culmination of one woman's s journey through some of the most dramatic events of the last century--the epic story of an artist who discovers her full power, passion, and creativity just as her revolution reveals its true direction for the future.
Visa hela texten

"We first met Fitch's passionate, independent Marina Makarova in The Revolution of Marina M...Fitch's darker, equally compelling sequel tracks Marina's perilous journey from 1919 to 1921...Marina's yearning for freedom propels her to risk everything in the dramatic final scenes."--Jane Ciabattari, BBC.com (10 Smartest Beach Reads of 2019) "Fitch gives a 360-degree view of the suffering caused by the Bolsheviks' consolidation of power and tells a long and sweeping story without wasting a word...Our heroine reflects the genius of the Silver Age poets. Their works, personalities, and disagreements are examined as if through a jeweler's loupe."--Barbara Conaty, Library Journal "Ceaselessly entertaining...Fitch's transporting sequel to The Revolution of Marina M. is even better than the first book...In this full-blooded feminine epic, Marina narrates her dramatic life with striking visual detail...Awash with emotion and poetic imagery...Fitch's tale channels the woman's vibrant spirit throughout. Historical-fiction fans should devour this."--Sarah Johnson, Booklist, (Starred Review) "Brilliant...a world of furious beauty, sprawling, majestic landscapes, and erotically charged and traumatic encounters, with life and love hanging in the balance... For the readers who have followed Marina and Fitch on this long, eventful journey, the ending feels satisfying. To Marina, it feels like divine intervention--a signal of the possibility of life and happiness despite everything...Fitch makes the answer clear: Marina is remarkably brave. Her saga should inspire us all to be braver."--Ani Kokobobo, Los Angeles Review of Books "A treat for fans of Russian literature...An unusual and passionate re-creation of the terrible tragedy of the Bolshevik Revolution and the timeless literary culture it produced."--Kirkus Reviews "[Chimes of a Lost Cathedral is] for anyone who's ever dreamed of meeting their heroes, centuries be damned."--Margaret Wappler, Los Angeles Times

Janet Fitch's first novel, White Oleander, a #1 bestseller and Oprah's Book Club selection, has been translated into twenty-eight languages and was made into a feature film. Her second novel, Paint It Black, hit bestseller lists across the country and has also been made into a film. Her third novel, The Revolution of Marina M., begins an epic journey through the Russian Revolution, which concludes with Chimes of a Lost Cathedral. She lives with her husband in Los Angeles.