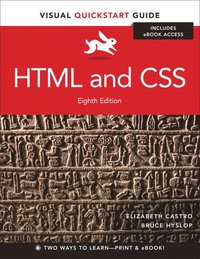 av Elizabeth Castro, Bruce Hyslop
Häftad Engelska, 2013-08-27
369
Köp
Spara som favorit
Skickas inom 7-10 vardagar.
Fri frakt inom Sverige för privatpersoner.
Need to learn HTML and CSS fast? This best-selling reference's visual format and step-by-step, task-based instructions will have you up and running with HTML in no time. In this updated edition author Bruce Hyslop uses crystal-clear instructions and friendly prose to introduce you to all of today's HTML and CSS essentials. The book has been refreshed to feature current web design best practices. You'll learn how to design, structure, and format your website. You'll learn about the new elements and form input types in HTML5. You'll create and use images, links, styles, and forms; and you'll add video, audio, and other multimedia to your site. You'll learn how to add visual effects with CSS3. You'll understand web standards and learn from code examples that reflect today's best practices. Finally, you will test and debug your site, and publish it to the web. Throughout the book, the author covers all of HTML and offers essential coverage of HTML5 and CSS techniques.
Visa hela texten

Bruce Hyslop began developing for the Web in 1997 and focuses on interface technical architecture, development, usability, accessibility, and advocating best practices. He is the author of The HTML Pocket Guide (Peachpit Press, 2010), a thorough discussion and reference of all HTML elements (HTML5 and prior). Bruce also teaches a CSS course at UCLA Extension and occasionally speaks on matters regarding front-end development. Over the years, he has overseen front-end teams or been a developer for more than 150 projects, including those for ABC, BBC, Disney, Logitech, Microsoft, NBC Universal, Nokia, Target, Toyota, and Yahoo!, among others. Bruce is an independent developer and consultant to agencies, start-ups, and others, previously having spent a decade in the digital agency world. Formerly, he was the senior director of the Interface Engineering Group (IEG) at Schematic, where he oversaw company-wide efforts to define and implement best practices regarding HTML, CSS, JavaScript, and accessibility wherever they may be applied: the browser, desktop, mobile devices, and emerging platforms.