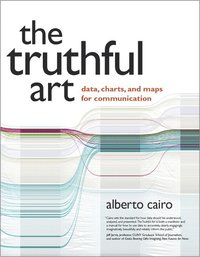 Data, Charts, and Maps for Communication

av Alberto Cairo
(1 röst)
Häftad Engelska, 2016-02-29
458
Köp
Spara som favorit
The Truthful Art is an introduction to quantitative thinking and statistical and cartographical representation written specifically for journalists and designers. A follow-up to The Functional Art, it goes into the specifics of how to create functional charts, maps, and graphs.
Visa hela texten

"Alberto Cairo is widely acknowledged as journalism's preeminent data viz wiz. He is also journalism's preeminent data scholar. As newsrooms rush to embrace data journalism as a new tooland toyCairo sets the standard for how data should be understood, analyzed, and presented. The Truthful Art is both a manifesto and a manual for how to use data to accurately, clearly, engagingly, imaginatively, beautifully, and reliably inform the public."

"A feast for both the eyes and mind, Alberto Cairo's The Truthful Art deftly explores the scienceand-artof data visualization. The book is a must-read for scientists, educators, journalists, and just about anyone who cares about how to communicate effectively in the information age."

If I were smarter, had more patience with academia, and had more focus, I might turn out to be more like Alberto, closer to the brilliance that he applies to the nature of information architecture. His title explains a lot: truth represents a most fundamental of attitudes, in questions asked, answers given and journeys taken. This [book] is a must on your thoughtful shelf of understanding.

Alberto Cairo is a great educator and an engaging storyteller. In The Truthful Art he takes us on a rich, informed, and well-visualized journey that depicts the process by which one scrutinizes data and represents information. The book synthesizes a lot of knowledge and carefully explains how to create effective visualizations with a focus on statistical principles. The Truthful Art will be incredibly useful to both practitioners and students, especially within the arts and humanities, such as those involved in data journalism and information design.

Isabel Meirelles, professor at OCAD University (Canada) and author of Design for Information

As soon as I started immersing myself in The Truthful Art, I was horrified (and somewhat ashamed) to realize how much I didnt know about data visualization. Ive spent most of my career pursuing a more illustrative way to present data, but Alberto Cairos clarifying prose superbly explained the finer points of data viz. Since Alberto warns us that [data is] always noisy, dirty, and uncertain, everyone in this business had better read his book to find out how to properly construct visualizations that not only tell the truth, but also allow us to interact meaningfully with them.

Alberto Cairo (Miami, FL) teaches Information Graphics and Visualization at the School of Communication at the University of Miami since January 2012. He holds a BA in Journalism (University of Santiago de Compostela) and a research-oriented Masters degree on Information Society Studies from the Universitat Oberta de Catalunya (Barcelona). He teaches courses on information graphics and visualization, and is interested in the convergence between Visual Communication, Journalism, and Cognitive Science. He is author of the books Infografia 2.0: Visualizacion interactiva de informacion en prensa (Alamut, Spain, 2008) and The Functional Art: an Introduction to Information Graphics and Visualization, published by Peachpit Press, a division of Pearson Education, in August 2012. He also writes regularly for El Pais, the main newspaper in Spain, in a blog on the future of Journalism, Periodismo con futuro. Between June 2010 and December 2011, he was the director for Infographics and Multimedia at Editora Globo, the magazine division of the biggest media group in Brazil, where he acted as an executive editor for the weekly news magazine Epoca and as an internal consultant for the other 12 publications of the group. He has also been an assistant professor at the School of Journalism, University of North Carolina-Chapel Hill, between 2005 and 2009. He was the James H. Schumaker Term Assistant Professor in 2008 and 2009. Alberto Cairo led the creation of the Interactive Infographics Department at El Mundo (elmundo.es, Spain), in 2000. Cairo's team won more Malofiej and Society for News Design (SND) infographics international awards than any other news organization worldwide between 2001 and 2005. Cairo has been an invited lecturer and keynote speaker at all most influential international conferences on visual journalism and design. He has taught in the US, Mexico, El Salvador, Venezuela, Ecuador, Peru, Brazil, Chile, Argentina, Spain, Portugal, France, Switzerland, Ukraine, Singapore, and South Korea. He has also been a consultant with many top news publications in those countries.

Preface: It All Begins With a Spark

Introduction: The Island of Knowledge and the Shoreline of Wonder

Chapter 4: Of Conjectures and Uncertainty

Chapter 12: On Creativity and Innovation

An Epilogue on What Lies Ahead