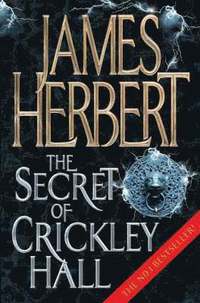 The Secret of Crickley Hall

av James Herbert
Häftad Engelska, 2007-05-01
109
Köp
Spara som favorit
Skickas inom 10-15 vardagar.
Fri frakt inom Sverige över 159 kr för privatpersoner.
Finns även som
Visa alla 1 format & utgåvor
The Caleighs have had a terrible year...They need time and space, while they await the news they dread. Gabe has brought his wife, Eve, and daughters, Loren and Cally, down to Devon, to the peaceful seaside village of Hollow Bay. He can work and Eve and the kids can have some peace and quiet and perhaps they can try, as a family, to come to terms with what's happened to them...Crickley Hall is an unusually large house on the outskirts of the village at the bottom of Devil's Cleave, a massive tree-lined gorge - the stuff of local legend. A river flows past the front garden. It's perfect for them...if a bit gloomy. And Chester, their dog, seems really spooked at being away from home. And old houses do make sounds. And it's constantly cold. And even though they shut the cellar door every night, it's always open again in morning...'The Secret of Crickley Hall' is James Herbert's finest novel to date. It explores the darker, more obtuse territories of evil and the supernatural. With brooding menace and rising tension, he masterfully and relentlessly draws the reader through to the ultimate revelation - one that will stay to chill the mind long after the book has been laid aside.
Visa hela texten

A new James Herbert novel is always a mesmerizing experience * Fangoria * A chilling classic haunted house tale -- <i>Publishers Weekly</i>, starred review A literary Steven Spielberg * Sunday Times * This is a powerfully disturbing read...two pages in, the reader is hooked, and Herbert has done his job. The horror. The horror. * Guardian *

James Herbert is not just Britain's No. 1 bestselling writer of chiller fiction, a position he has held since publication of his first novel, but is one of our greatest popular novelists, whose books are sold in thirty-five other languages, including Russian and Chinese. Widely imitated and hugely influential, his twenty novels have sold more than fifty million copies worldwide.