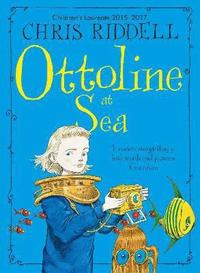 av Chris Riddell
Häftad Engelska, 2015-02-26
79
Köp
Spara som favorit
Skickas inom 10-15 vardagar.
Fri frakt inom Sverige över 159 kr för privatpersoner.
Finns även som
Visa alla 2 format & utgåvor
Ottoline and Mr. Munroe do everything and go everywhere together. That is, until the day Mr. Munroe mysteriously disappears, leaving a strange clue written in string . . . Armed with her Amateur Roving Collectors' travel pass, Ottoline sets off on a journey over, under and on top of the sea to find her hairy best friend - and bring him back home. Ottoline at Sea is the third enchanting Ottoline adventure from Kate Greenaway award winner, Chris Riddell. With his appealing illustration style, Riddell's humorous details make this a book to pore over and adore.
Visa hela texten

Chris Riddell, the 2015-2017 UK Children's Laureate, is an accomplished artist and the political cartoonist for the Observer. He has enjoyed great acclaim for his books for children. His books have won a number of major prizes, including the 2001 and 2004 CILIP Kate Greenaway Medals. Goth Girl and the Ghost of a Mouse won the Costa Children's Book Award 2013. His previous work for Macmillan includes the bestselling Ottoline books, The Emperor of Absurdia, and, with Paul Stewart, the Muddle Earth books, the Scavenger series and the Blobheads series. Chris lives in Brighton with his family.