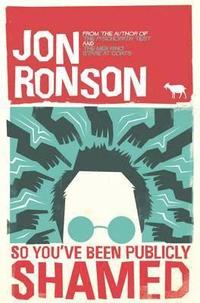 So You've Been Publicly Shamed

av Jon Ronson
(1 röst)
Häftad Engelska, 2015-12-31
29 141 Du sparar 112 kr!
Förboka
Spara som favorit
Finns även som
Visa alla 3 format & utgåvor
From Jon Ronson, the Sunday Times top ten bestselling author of The Psychopath Test, this is a captivating and brilliant exploration of one of our world's most underappreciated forces: shame. 'It's about the terror, isn't it?' 'The terror of what?' I said. 'The terror of being found out.' Jon Ronson has travelled the world meeting recipients of high-profile public shamings. The shamed are people like us - people who, say, made a joke on social media that came out badly, or made a mistake at work. Once their transgression is revealed, collective outrage circles with the force of a hurricane and the next thing they know they're being torn apart by an angry mob, jeered at, demonized, sometimes even fired from their job. A great renaissance of public shaming is sweeping our land. Justice has been democratized. The silent majority are getting a voice. But what are we doing with our voice? We are mercilessly finding people's faults. We are defining the boundaries of normality by ruining the lives of those outside it. We are using shame as a form of social control. Simultaneously powerful and hilarious in the way only Jon Ronson can be, So You've Been Publicly Shamed is a deeply honest book about modern life, full of eye-opening truths about the escalating war on human flaws - and the very scary part we all play in it.
Visa hela texten

He is such an exceptional writer . . . an incredibly funny writer . . . a perfect sense of comic timing throughout, but he manages to deal with profound subjects . . . so enjoyable . . . you can be having a laugh while understanding a social phenomenon in a completely unique way; it's such a great book . . . We're buying it! * The BBC Radio 2 Arts Show with Claudia Winkleman * A magnificent book, subtly argued, often painfully funny and yet deeply serious. . . I'm not sure I can recommend it highly enough * Daily Mail * A work of original, inspired journalism, it considers the complex dynamics between those who shame and those who are shamed, both of whom can become the focus of social media's grotesque, disproportionate judgments -- Laurence Scott * Financial Times * superb and terrifying . . . So You've Been Publicly Shamed brings together all of Ronson's virtues as a writer, to a more serious purpose than hitherto . . . Ronson is a true virtuoso of the faux-naive style. He is so good at it that it's not irritating . . . Ronson has beautiful comic-prose skills . . . but Ronson's self-description as a "humorous journalist" is not the whole story. Comedy is his disguise and also his weapon. He is a moralist. Some of his best lines seem casual but contain fierce social diagnoses . . . towards the end of his new book, someone accuses him of "prurient curiosity". This prompts what may be taken as a statement of the moral approach behind all his work. "I didn't want to write a book that advocated for a less curious world. Prurient curiosity may not be great. But curiosity is. People's flaws need to be written about. The flaws of some people lead to horrors inflicted on to others. And then there are the more human flaws that, when you shine a light on to them, de-demonise people that might otherwise be seen as ogres." At its best, this is exactly what his writing can do . . . relentlessly entertaining and thought-provoking -- Steven Poole * Guardian * Ronson is our current master of smarter-than-average pop nonfiction that combines social science, investigative journalism and no shortage of style . . . Ronson and his subjects are strikingly candid about their fears, which is compelling if not always comfortable to read. But the book slowly turns out to be about something bigger than it seems: a survival guide to living with shame both public and private, an inevitable consequence of being human. * Saturday Paper (Australia) * Ronson's finely attuned ear for dialogue and his skilfully deployed nebbishness ensure a pacy but discomfiting read -- Gillian Terzis * The Australian * Jon Ronson's great strength as a writer is his empathy with his subject, which seems to bring about trust and openness from his interviewees. Like all journalists, he is a voyeur, but he is sensitive with his material and self-analytical enough to realise his own part in the phenomenon. So You've Been Publicly Shamed is an interesting commentary on human behaviour and its consequences. * The Register * immensely readable -- Will Dean * Independent * [A] brilliant, thought-provoking book - a fascinating examination of citizen justice, which has enjoyed a great renaissance since the advent of the internet * Tatler * Amusing and thought-provoking * Daily Telegraph * Certainly, no reader could finish it without feeling a need to be gentler online, to defer judgment, not to press the retweet button, to resist that primal impulse to stoke the fires of shame * The Times * As in his previous books, Ronson's style is to take us with him wherever the story goes, curiosity his guide. But unlike bestsellers The Men Who Stare At Goats (US new age warfare), The Psychopath Test (the mental health 'industry') or Them (ideological extremism), Shamed is not a critique of those at the fringes of our society, it's about us - or at least the very many of us who take to Twitter to heap vitriol on those we feel deserve it * Metro * Jon Ronson is one of

Jon Ronson is an award-winning writer and documentary maker. He is the author of many bestselling books, including Frank: The True Story that Inspired the Movie, Lost at Sea: The Jon Ronson Mysteries, The Psychopath Test, The Men Who Stare at Goats and Them: Adventures with Extremists. His first fictional screenplay, Frank, co-written with Peter Straughan, starred Michael Fassbender. He is the creator of podcasts including Things Fell Apart and The Butterfly Effect. He lives in London and New York City.