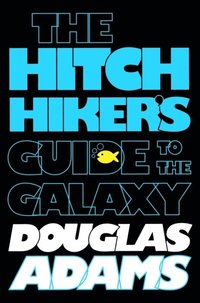 The Hitchhiker's Guide to the Galaxy

av Douglas Adams
(3 röster)
Häftad Engelska, 2009-09-01
Unga vuxna
95
Köp
Spara som favorit
Finns även som
Visa alla 3 format & utgåvor
Go on a galactic adventure with the last human on Earth, his alien best friend, and a depressed android. Introducing younger readers to The Hitchhiker's Guide to the Galaxy, this YA edition of the funny sci-fi classic includes an introduction from Artemis Fowl author Eoin Colfer. One Thursday lunchtime the Earth gets unexpectedly demolished to make way for a new hyperspace bypass. It's the final straw for Arthur Dent, who has already had his house bulldozed that morning. But for Arthur, that is only the beginning . . . In the seconds before global obliteration, Arthur is plucked from the planet by his friend Ford Prefect - and together the pair venture out across the galaxy on the craziest, strangest road trip of all time! Totally hilarious, The Hitchhiker's Guide to the Galaxy has been a radio show, TV show, stage play, comic book and film, and is and a work of utter comic genius from Douglas Adams.
Visa hela texten

Douglas Adams created all the various and contradictory manifestations of The Hitchhiker's Guide to the Galaxy: radio, novels, TV, computer game, stage adaptations, comic book and bath towel. He lectured and broadcast around the world and was a patron of the Dian Fossey Gorilla Fund and Save the Rhino International. Douglas Adams was born in Cambridge, UK and lived with his wife and daughter in Islington, London, before moving to Santa Barbara, California, where he died suddenly in 2001. In addition to the Hitchhiker series, He is also the author of the Dirk Gently novels: Dirk Gently's Holistic Detective Agency, The Long Dark Tea Time of the Soul as well as the non-fiction Last Chance To See and the unfinished The Salmon of Doubt.